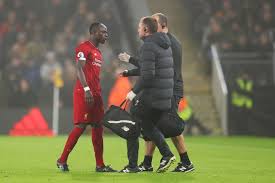 Jurgen Klopp has revealed that Sadio Mane will sit out Liverpool’s upcoming games against West Ham and Southampton with a “small muscle tear”.

The Reds saw their Senegalese forward pick up an untimely injury during a 2-1 win over Wolves and he was forced from the field at Molineux, raising fears as to his long-term fitness.

Liverpool were quick to play down the severity of the problem, with Klopp suggesting in the immediate aftermath of yet another win for his Premier League title chasers that a key man had merely tweaked something.

Mane’s ailment is a little more serious than that, but the hope is that he will not be sidelined for long.

The Reds will be wary of rushing him back into action but, with the club’s winter break approaching, he can be granted an extended period of rest.

Klopp is not expecting to have Mane at his disposal again until taking in a meeting with Norwich on February 15.

That means the 27-year-old, who has another 15 goals to his name this season, will miss upcoming fixtures against the Hammers and Saints.

Klopp told reporters when asked for an update on Mane: “Sadio will not be involved for West Ham and probably not Southampton. After that he will be back on track.

“He has a small muscle tear which is serious enough. We were lucky with it though it wasn’t too serious. He’s out for three games.”

Mane has already sat out Liverpool’s 2-2 draw with Shrewsbury in the fourth round of the FA Cup and will also be absent for a replay at Anfield, with Klopp planning on fielding his youngsters again in that contest.

The decision to keep his senior stars out of a return date with the Shrews has attracted criticism from some, with English football’s oldest cup competition considered to be being undermined, but the Liverpool boss stands by his decision.

He said, with U23 coach Neil Critchley and his side set to step in as they did for a Carabao Cup quarter-final date with Aston Villa earlier in the season: “I love cup competitions.

“In Dortmund I was three or four times in a cup final. But I have to see the bigger picture. The players have their [training and mid-season break] programme.

“Critch did really, really well at Aston Villa. The goals they scored there – forget them. With a similar performance, the boys have a chance against Shrewsbury. I hope they will make it.”

Klopp added on the need to have a break: “I don’t want to be the person who is the shouter for everyone.

“If we don’t raise the problem it will be only more. We want to play football as often as possible – the key word is possible.

“But there comes a moment where we must say ‘no’.”