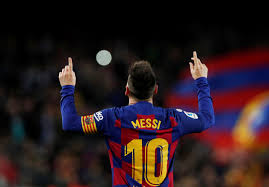 The football world collectively hopes it will be a long time before Lionel Messi’s genius starts to fade and the Barcelona star is proving week after week that he will not go gentle into that good night.

The 32-year-old scored a hat-trick of set-piece goals in Barcelona’s 4-1 win over Celta Vigo on Saturday in La Liga, an art he has steadily perfected.

When the No.10 can no longer charge at defences and poses fewer problems for opponents with his speed and agility, he will still possess these weapons.

Messi is the best free-kick taker in the world and scored two unstoppable efforts against Celta, along with a penalty to send Barcelona back top of La Liga.

Of Messi’s nine goals this season across all competitions, four have been free kicks and two penalties, with the other three coming in open play.

The Catalans have endured troubled weeks, failing to hit top form, and this victory over Celta will not go down as a great performance by any means.

Even Messi struggled, uncharacteristically letting one ball slip over his foot and out of play in the first half, a rare lapse in concentration.

After tucking home a penalty awarded when Aidoo handled Junior Firpo’s cross, Messi made another mistake.

Barcelona’s talisman gave the ball away in midfield and conceded a foul on the edge of his own box as he tried to win it back. Lucas Olaza whipped home the free-kick with aplomb to equalise, but Messi quickly hit back.

Four minutes later he sent Barcelona back ahead, with a perfectly placed free-kick of his own, which arced beyond the helpless Ruben Blanco in first-half stoppage time.

Three minutes into the second and Messi repeated the trick, with a near identical effort which Ruben watched sink into the net, well out of reach.

It was the first hat-trick of set-pieces in La Liga since… a certain Lionel Messi scored one in 2012 against Espanyol.

That time it was two penalties and one free kick, but seven years down the line Messi is far better at both.

For a while Messi’s penalty record wavered but lately he seems far more confident from the spot, with his last miss coming in February against Real Valladolid, having already scored one in that game.

More impressive still are Messi’s free-kick statistics. Across the last eight seasons at club level, Messi has scored 29 free kicks – more than any individual side, with Juventus on 27 his closest competitors.

This was the third time he has scored two free kicks in a single game, having done so against Sevilla in 2015 in the European Super Cup, and against Espanyol in La Liga last year.

When teams concede free kicks on the edge of their own box they feel almost as dangerous as penalties with Messi standing over them.

“It’s clear that when it’s so close we have the advantage of having the best player in the world and the best free-kick taker in the world,” said Sergio Busquets, who scored the late fourth goal.

“He’s been improving and that’s an advantage, I hope he keeps scoring them.”

Ernesto Valverde’s Barcelona are flawed and this win will not paper over the cracks, especially as one of which is extreme dependence on Messi.

But sometimes you have to put the pitchforks down, sit back, and respect the (set-piece) king.