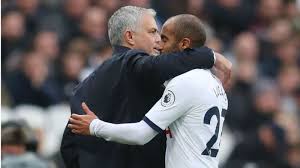 The Brazil forward is enjoying life under the former Chelsea and Manchester United boss and is confident success is not far away
Lucas Moura says Jose Mourinho is an “iconic” manager whose “winning mindset” will ensure Tottenham soon ends its long trophy drought.

The north London club have not lifted silverware of any description since the 2008 League Cup. Mourinho, in contrast, has won 25 honours during his managerial career, including three Premier League titles and two Champions Leagues.

The Portuguese’s ability to pick up trophies on a regular basis was seen as a major factor behind his appointment as Spurs manager last month.

Moura certainly agrees with that sentiment as he feels everything is already in place for the club to enjoy a sustained period of success, with Mourinho the final piece in the jigsaw.

When asked by A Bola whether Mourinho’s arrival means Tottenham will soon compete with the likes of Liverpool and Manchester City for titles, the 27-year-old said: “I really believe that, very much.

“We need to continue the work that has been done over the past five years, and now with the special touch of a coach who knows the way of titles like no one else. It has everything to happen.

“Mourinho is undoubtedly one of the most iconic coaches with whom I have worked given all he has achieved and for his history. He is among the best coaches in the world. It is a great pleasure to work with him.

“We have the structure, squad, great players and a great coach. To crown it all with a title, we simply need to believe and know that we also have the same ability as they (Manchester City and Liverpool) have. You need to add this winning mindset.”

Moura says Mourinho has already had a positive impact during his short time in charge and that his reputation means he instantly commanded respect from the squad.

As a result, the former Paris Saint-Germain forward believes he can become a better player under his tutelage.

“I will try to absorb as much as I can, I can learn a lot from him. He brings tremendous confidence to the group, as he has achieved so many things in his career. His is has a name marked in the history of football,” he added.

“I have many goals yet, I can contribute a lot. I really want to win a title for Tottenham. And I really believe in that, especially because of our structure, our squad and now with a coach who has won titles wherever he went.”