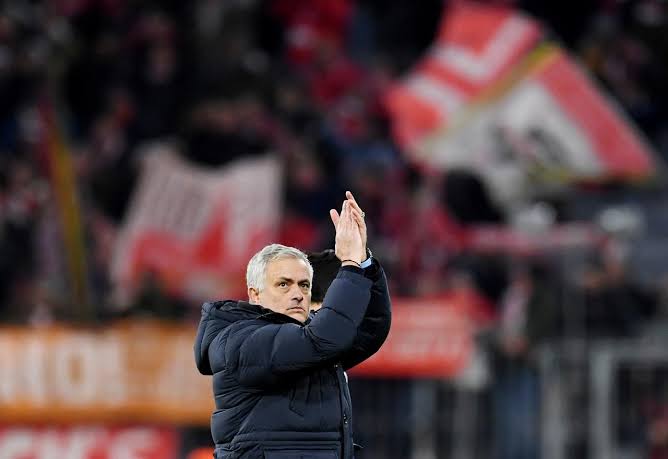 Tottenham manager Jose Mourinho wanted to avoid speaking about “conclusions” after seeing his side comfortably beaten 3-1 by Bayern Munich in the Champions League on Wednesday.
While a much better result than the Spurs’ 7-2 defeat to the Germans in October, Mourinho’s men struggled to compete having left a number of their star players at home with qualification already secured for the knockout stage.
Despite the performance and result, the 90 minutes proved useful for Mourinho as he got to know fringe members of his squad.

“A good match for me. I don’t want to speak about conclusions because it is too strong a word but I would say important information,” Mourinho told BT Sport.
“I give you clearly a positive example because they are easier. Today I learned a lot about Juan Foyth. He didn’t play one minute for me until today and I learned more in these 90 minutes than I did in two or three weeks of training. No conclusions but good information.
“I would prefer to win or to draw and for Son [Heung-min] to score in the last minute and lose 3-2 rather than 3-1 of course but we knew the match was important for other reasons. We didn’t want a result that leaves a shadow on us but I think positive things about many of the boys.”
After Kingsley Coman opened the scoring for Bayern in the 14th minute, Tottenham found an equaliser just six minutes later through 19-year-old Ryan Sessegnon.
Making his Champions League debut, the left-sided player showed signs of his potential and while impressed with his goal, Mourinho stressed there’s plenty of room for improvement.
“That is his quality, that is the quality we know he has,” Mourinho said. “He arrives always in dangerous positions and he is a good finisher.
“He can improve, he lost too many individual duels. He has a lot to develop but the potential is there.”
Sessegnon himself bemoaned his side’s lack of efficiency in front of goal but declared he’s now ready to state his claim in the Spurs side after initial fitness issues.
“If you don’t take your chances against the big teams you get punished,” Sessegnon told BT Sport. “We knew it would be tough coming here, disappointed we didn’t get the win today. We were chasing the ball but I think we got into good positions in the transitions.
“I felt good. Physically towards the end I felt tired but physically I felt good and to get the goal was good as well. That’s what I want to do. I came to the club injured, it was difficult at the start but now I just want to get more minutes now.”