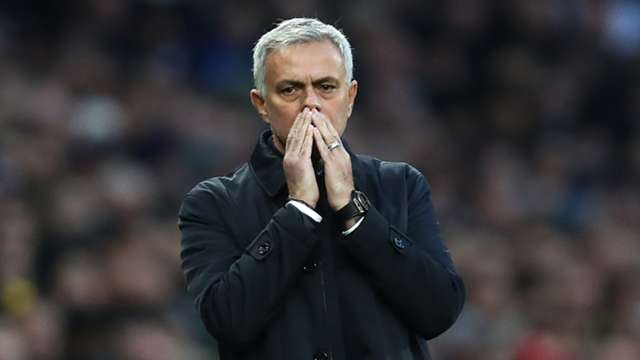 The Portuguese had hoped to prove a point against the club that sacked him but he got it all wrong during Tottenham’s tame 2-1 defeat at Old Trafford
Jose Mourinho finally got the best out of Marcus Rashford. And, for that matter, Jesse Lingard.

On his return to Old Trafford, the newly-installed Tottenham manager simply gave the game away.

Not only was his own selection baffling – leading to an error-strewn display against, frankly, one of the most average teams in the Premier League – but he permitted Ole Gunnar Solskjaer to do a job on him without offering very much in return.

Mourinho’s decision to play with Moussa Sissoko as the closest player to Serge Aurier was a disaster from the get-go. Solskjaer could hardly have believed his luck, with his game plan of getting the ball into the Spurs right-hand channel paying dividends immediately.

It appeared as though Rashford, Lingard and Mason Greenwood were taking in turns to appear in that gap to receive the ball. It was no surprise that United’s goals – and their other good chances – came from that sector.

The problems with Mourinho’s line-up bled into other areas of the team. He fielded Sissoko beside Harry Winks for the first time in a midfield pivot. By choosing Dele Alli up alongside Harry Kane he lost a third midfielder.

With Lingard rotating in and out of the strike-line in the absence of Anthony Martial, he and Scott McTominay and Fred had plenty of time and space to find their passes in and around the centre of the field.

What’s more, Mourinho never corrected it. At half-time he had the option of turning to Tanguy Ndombele, Christian Eriksen or Eric Dier to alleviate the pressure on his midfield but he did not take it.

Within seconds of the restart, United had moved the ball to Rashford. He blitzed both Aurier and Sissoko to win his penalty.

The lack of identity in the Spurs play – and the carelessness they demonstrated in possession – is alarming, especially for a team under a manager so hellbent on proving a point to his former employers.

Solskjaer won this battle hands down and United were unlucky in that they found themselves level at the break and that they didn’t score more.

Paulo Gazzaniga was overworked in the Spurs net, even if he should have done better with Rashford’s first goal. He made two other good saves from the England man, who is beginning to grow into the burden of shouldering the United attack.

Spurs scarcely had a threatening touch although Dele Alli’s goal deserves its praise as a world-class effort. But that it took something so magic to get Spurs into the game should give Mourinho pause for thought.

There was no great plan behind it; it was off-the-cuff brilliance by a man who has found his form with three goals in three games for this manager.

Harry Kane was starved of service but failed to do much of note when he had the ball. Mourinho has spent Ballon d’Or week praising Son Heung-min but his Korean forward fared no better than Kane on the night.

Lucas Moura was a disappointment again, with Mourinho left with no option but to withdraw him in the end.

His selection allowed no manoeuvrability. Without a recognised left-back – although Danny Rose sat on the bench – Jan Vertonghen could not shuffle across into a three because there would be no one to replace him. Similarly, Dier has a dexterity to move around that is simply not available to Sissoko or Winks.

Perhaps Mourinho is suffering the side effects of a lopsided squad bequeathed to him by Mauricio Pochettino. But he’s got it right by and large up to now and flopped on his big night to impress.

Solskjaer, meanwhile, deserves the credit. His game plan worked and his team took his chances. With this positive result and performance – not to mention four homegrown players in the starting XI – you can see what he is trying to achieve.

No one is going to mistake McTominay’s skill-set for Paul Pogba’s but he is proving on a game-by-game basis what Mourinho suspected from the beginning: that he can do the dirty work that the World Cup winner cannot.

His cause to continue in the job long-term has not been helped by a sequence of shocking results and abject performances but in a week which ends with a trip to Manchester City he has done his prospects no harm at all.

Greenwood coped well and showed his versatility. One chance in the first half which ended with a Gazzaniga save from the teenager began with the ball at Greenwood’s feet in midfield. Lingard had his best game of the season, delivering smart link-up play with his friend Rashford, and rotating in and out of a false 9 berth.

There were jitters in the end, maybe a lack of self-belief to see the job through. Rashford missed two injury-time chances to kill the game and Spurs might have rescued something with their late rally.

But Mourinho left without making a point. There were no fingers to the lips. There were no marches down the touchline. The biggest effect Mourinho had on the game was when Dan James’s head made contact with his shin.

He had to stand there and take his medicine as Manchester United demonstrated they could move onwards and upwards.