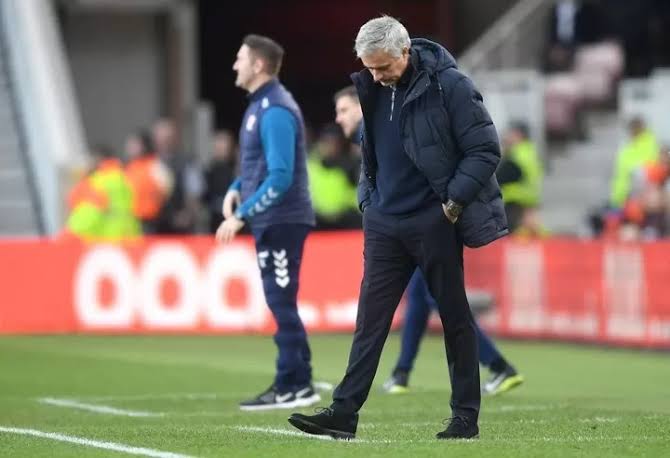 Jose Mourinho says the ball used in Tottenham’s FA Cup clash at Middlesbrough was “too light” and like a “beach ball”, though he insisted that was not the reason why his side failed to come away with a victory.
Spurs needed a late equaliser from Lucas Moura to earn a replay after Ashley Fletcher put the Championship side ahead five minutes into the second half.
Speaking after the game Mourinho had an unusual gripe, claiming there was a notable difference with the ball used in the FA Cup compared to the Premier League, which hampered his side’s ability to maintain possession.

“I think this ball is [a] beach ball. It’s too light. I don’t think it helps the players. But that’s not an excuse,” he told BT Sport.
The Portuguese was also aggrieved as he felt VAR would have disallowed Fletcher’s goal for offside, but the technology was not in place at Riverside Stadium.
“Yeah because the Middlesbrough goal is offside. VAR would give [the offside decision],” Mourinho added. “The referee was not some guy in an office 200 miles away [today].”
Reflecting on the game as a whole Mourinho admitted the side lacked a cutting edge without the injured Harry Kane, with Son Hueng-Min and goalscorer Lucas starting in his absence.
However, the former Chelsea boss said the 56th-minute introduction of Giovani Lo Celso and Erik Lamela helped the team to get a grip on the game as the second half wore on.
“When we were losing 1-0 without strikers or the power to play inside their defensive line with lots of bodies and great soul, at that moment I had the feeling of ‘we are in trouble’,” he told BBC Sport. “But then everyone reacted. I reacted. The boys reacted.
“Giovani Lo Celso and Erik Lamela helped us a lot. If one team has to win, it has to be us because we had so many chances. We missed easy last balls.
“We knew the way they play, long balls to the strikers. Because we have no striker I wanted to give Son and Lucas the chance to play together as a more dynamic double striker pair – different to Harry Kane. But Lamela and Lo Celso gave us more ball. We played well very in the last 20 minutes, we were just missing a second goal.”
The draw means an extra game to Tottenham’s already crowded fixture list, something Mourinho admits is not ideal.
However, he insists he would rather have a second chance in the form of a replay than exit the competition at this early stage.

”We wanted to win but we knew it would be difficult,” said the 56-year-old. “We managed to bring the game to our stadium. It’s a game we don’t need, our squad is short with so many problems – but it’s a game at home and we have to go for it.
“This is just the third round and the first for us. We could be out at this moment like a few other Premier League teams. Every match is difficult.
“Championship teams are getting closer to the level of Premier League teams. You could confuse a Premier League team and a Championship team. I wanted more but I cannot say I’m disappointed.”