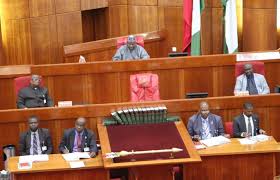 The National Assembly has adjourned plenary in the Senate and House of Representatives chambers for two weeks.

The President of the Senate, Senator Ahmad Lawan, who announced this on Tuesday said the lawmakers would resume plenary on April 7.

This followed a resolution reached by members of the Upper Chamber during a closed session which lasted about 40 minutes.

Giving details into what transpired during the closed-door session, Lawan said lawmakers unanimously agreed that the National Assembly should adjourn plenary for a period of two weeks.

He explained that the decision was due to the coronavirus (COVID-19) pandemic which has led to most countries shutting down activities, in order to curtail the spread of the disease.

The Senate President, however, disclosed that the Senate would reconvene to attend to matters of national importance which require urgent legislative intervention within the period of the recess.

He said, “The Senate, in particular and the National Assembly in general, further resolved to adjourn sitting for two weeks from today, due to the pandemic of coronavirus ravaging the entire world, and therefore, the Senate resumes on the 7th of April.

“However, the Senate will be on hand in case of emergency in any national issue that requires its attention.”

The Senate President advised Nigerians to observe all preventive measures recommended by the National Centre for Disease Control (NCDC).

He called on the Federal Government to immediately set aside a Special Intervention Fund to curtail the spread of COVID-19 in the country and release financial assistance to states for the same purpose.

“As at now, the only way out of the pandemic is for the population to observe recommended measures and advice by the National Centre or Disease Control (NCDC),” the lawmaker said.

He added, “The Federal Government should devote special funds to fight the COVID-19 virus threatening Nigeria.

“The Senate Committee on Health and Private Healthcare and Communicable diseases will continue to engage the Federal Ministry of Health and Presidential Task Force on COVID-19.”