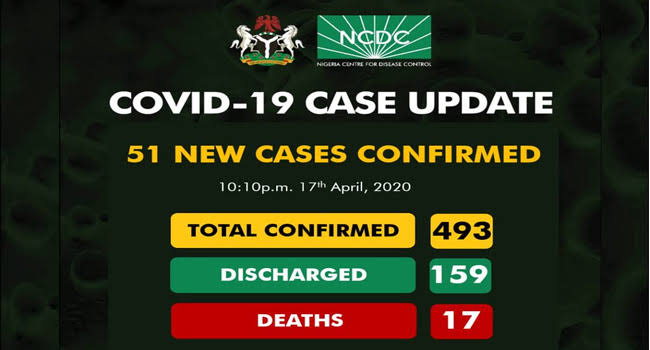 Nigeria has recorded 51 new cases of the novel coronavirus, according to the Nigeria Centre for Disease Control (NCDC).

In a tweet on Friday, the NCDC reported 32 cases in Lagos, six in Kano, five in Kwara, two each in the Federal Capital Territory and Oyo, and one each in Ogun and Ekiti.

Fifty-one new cases of #COVID19 have been reported;

However, the number of discharged patients rose by seven to 159.

Earlier on Friday, the NCDC said it had tested 7,153 samples for COVID-19 in the country, but pledged to ramp up the rate of testing, especially in Lagos and the FCT.

“We aim to increase access to testing as new testing modalities also become available,” Director-General of the NCDC, Dr. Chikwe Ihekweazu said on Friday during the Presidential Task Force for COVID-19 briefing in Abuja.

The novel coronavirus has now killed more than 1,000 people across Africa since the pandemic emerged late last year, according to an AFP tally using official figures.

Algeria is the African country with the highest number of deaths at 364, followed by Egypt with 205, Morocco 135 and South Africa 50, according to the figures compiled late Friday.

Africa has so far suffered less than other regions from COVID-19, the disease caused by the coronavirus — at least according to official numbers.

But limited testing in many countries has deprived African officials of a full picture of the disease’s spread.

The worldwide death toll has topped 150,000 people while more than 2.2 million infections have been declared