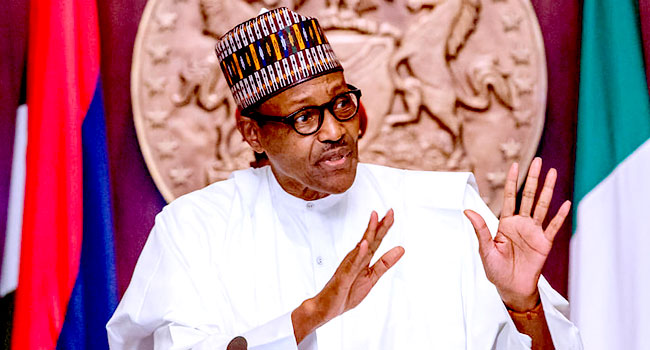 The President was speaking at the closing of the first-year ministerial performance review retreat held in Abuja.

“I want the Nigerian elites, please encourage them, to judge us fairly,” Buhari said, arguing that his administration has done more for the country with less resources.

“When we came, it collapsed to $37, $38 per barrel, you know it. And the militants were unleashed on the administration, and the production went down to half a million barrels per day.

“I want you to please reflect, what was the condition of the infrastructure then, in spite of those earnings. The roads, the rail is dead and there was no power, up till now no power; where does the money go?”

The President said he was “doing my best” to fight corruption by “trying to follow the system” in contrast to his brief military regime in 1984 when he arbitrarily rounded up politicians, threw them in jail, and required them to prove their innocence.

The President also addressed the long-running conflict between cattle rearers and farmers, blaming past leaders who encroached cattle routes.

The President said when he met with the President of the United States, he was asked ‘why are you killing Christians?’

Buhari said he tried to explain that the conflict had nothing to do with ethnicity or religion but a failure of leadership.

“The First Republic leadership is the most irresponsible set of leadership we’ve ever had,” he said.

“I asked the Minister of Agriculture to get a gazette of the early sixties, which delineated the cattle routes, the grazing areas.

“So any cattle rearer that allows his cattle to go to somebody’s farm is arrested, taken before a court. The farmer is called to submit his bill. And if the cattle rearer cannot pay, his cattle are sold.

“But subsequent leaders encroached on the cattle routes, took over the cattle areas.”