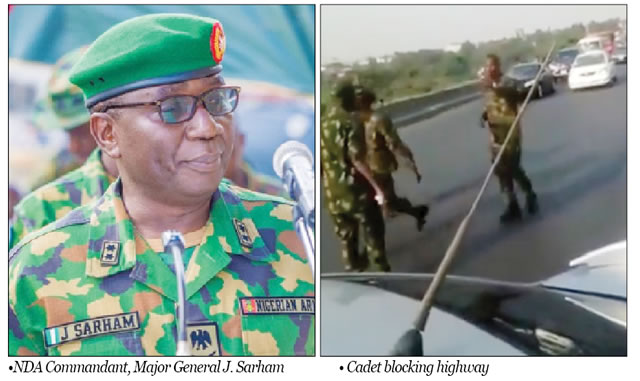 Nigerians have expressed outrage online over a trending video showing cadets of the Nigerian Defence Academy blocking an expressway and insulting motorists in what appears to be a show of force.

The act, which is a tradition known as Plumming 101, is usually perpetrated by cadets during the Christmas or New Year holiday.

In a recent amateur video posted on Twitter by ‘The Herald’, about five cadets clad in military camouflage were seen causing gridlock on a portion of an unidentified expressway.

While the motorists were held in the traffic, the men frolicked around the road, taking selfies, dancing and marching for fun.

Amid their unbridled conduct, each of the cadets dished out threats to the hapless motorists, daring them to question their action.

One of the cadets is seen dancing ‘Zanku’ on the road while some agitated motorists were forced to park their cars at the centre of the road and watched helplessly.

As the delay persisted, a driver, who seemed to be disturbed by the act, sounded the horn of his car, but his reaction was met with rebuke.

“Who is that bastard horning (sic)? Are you a bastard? One of the cadets thundered.

In a second video posted by ‘The Herald,’ cadets were seen shutting down Leventis Roundabout in Kaduna State, causing gridlock.

The insolent act was met with criticisms from a large section of Nigerians on several social media platforms.

A Twitter user, @Fieldaffidavit, said the government’s disregard for the rule of law had emboldened the cadets to abuse the rights of Nigerians.

He tweeted, “It started with disobeying court orders and nothing happened. Hence, there’s nothing wrong with blocking (the) road. After all, ‘they cannot do anything’. Absolute power corrupts absolutely!”

Another user, @WaleAkinro, said the unruly behaviour of the cadets showed that the NDA as an institution lacked values.

“This is what happens when the academy itself doesn’t have values,” he said.

“I hope the Nigerian Army calls these guys in for serious disciplinary action. Our soldiers are well trained officers not some recalcitrant kids showing power on the highway by constituting a nuisance. The cadets of today will become officers tomorrow,” @kennygee_70 tweeted.

Yinka Ogunnubi asked the military to identify and expel the cadets because they could be worse when they became commissioned officers.

“What do you think these ones will do when they become fully commissioned soldiers of the Nigerian Army? God help us. I hope they get punished. Nah! I actually hope they get flushed out,” he tweeted.

An Instagram user, somebodys_1stson, said the cadets’ conduct showed that the training given to them fell short of moral standards.

He wrote, “Look at them. This is what happens when you invest 95 per cent energy training these boys in physical activity and five per cent in morals. They end up thinking they have achieved God’s status and have no respect for the people they pledge to serve.”

Another Instagram user, Savagery001, called for the immediate expulsion of the trainee military men to “serve as a deterrent to other cadets who want to do such.”

“…A lot of people dey (are) inside traffic going for interviews and medical emergency purpose,” another commenter, Gabianosg, wrote on Instagram.

When contacted on the telephone by one of our correspondents, the spokesman for the NDA, Major Abubakar Abdullahi, said he would respond later.

“Please give me some time to respond,” he said.

When he was contacted five hours later, he did not respond to phone calls.

The PUNCH had reported how in December 2018, some first year cadets of the NDA threw caution to the wind, blocking a section of the Mararaba/Keffi Expressway and holding motorists to ransom.

One of the cadets was seen in the video calling the civilians ‘bastards’, and asking them to surrender to his authority.

Not done, the young men said to be between the ages of 16 and 20 stormed a birthday party uninvited.

When the host accosted them, they asked him to hold his ears and jump in a squatting position repeatedly, a punishment colloquially known as ‘frog jump.’