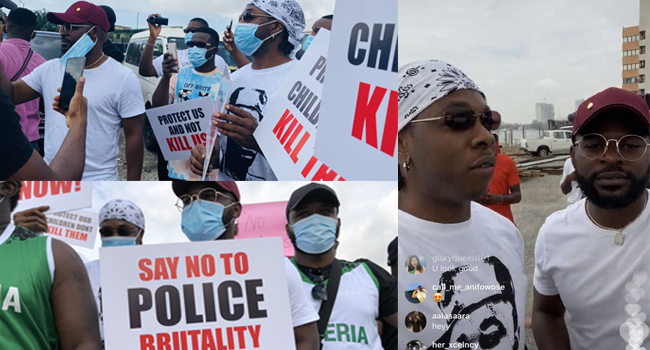 Nigerians on Thursday took the #EndSARS protest to the Police Headquarters in Abuja, the nation’s capital.

The protest which is demanding an end to brutality and extra-judicial killings by operatives of the Special Anti-Robbery Squad (SARS) also took place in other states including Lagos, Edo, Kwara, and Imo State.

In Abuja, the protesters were led by Human Rights activists, Deji Adeyanju and Aisha Yesufu, and the publisher of Sahara Reporters Omoyele Sowore.

The campaigners sat on the Shehu Shagari Way, shouting ‘EndSARS,’ while paralysing vehicular movement. They also wielded placards with the same inscription and poured red paints on the floors to signify the blood of victims of extrajudicial killings.

In Lagos State, the protesters were joined by music artistes and celebrities including Folarin Falana popularly known as Falz; and pop star, Runtown; Tiwa Savage, Paul of Psquare, Jaywon, Dremo, This is Wurld and popular Dj Spinall.

In Benin City, the capital of Edo State, youths from various groups including Coalition of Youth Groups, Civil Society Of Nigeria, and National Association of Nigerian Students (NANS) marched in a peaceful protest and called for an end to harassment by members of the Special Anti-Robbery Squad.

The youths converged on Ring Road, marched to the Nigeria Union of Journalists (NUJ) secretariat in the state, and later moved to the Edo State Police Command Headquarters to express their agitations.

In Imo State, the protesters were dispersed with teargas by the officers of the Imo State Police Command.

The protesters before they were dispersed gathered around the popular Imo State University Junction in Owerri, the Imo State capital carrying placards with various inscription and chanting solidarity songs.

A scuffle almost ensued when the police officers were dispersing the crowd as the Divisional Police Officer of Orji Division was seen wielding his gun and attempting to threaten one of the protesters.

The Commissioner of Police in Imo State Isaac Akinmoyede while reacting TO the development said the police were trying to do their job in preventing any breakdown of law and order in the state as the actions of the protesters were already disturbing free flow of traffic.

He, however, condemned the action of the DPO who was seen harassing the protesters with his gun, he says disciplinary actions will be taken against the officer.

See more photos from the protest below….