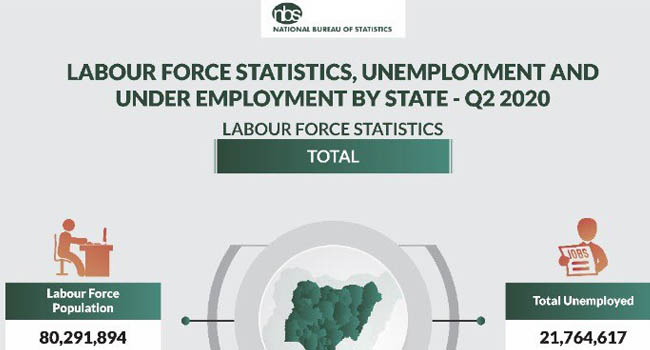 Nigeria’s unemployment rate has now gotten to 27 per cent in the second quarter of 2020, a move from 23.1 per cent reported in the third quarter of 2018.

The National Bureau of Statistics (NBS) disclosed this in its ‘Labor Force Statistics: Unemployment and Underemployment Report’ released on Friday.

At 48.7 per cent, Imo State has the highest unemployment rate in the country and is trailed by Akwa-Ibom State (45.2 per cent) and Rivers State (43.7 per cent).

Anambra State, however, has the lowest unemployment rate in the nation – 17 per cent.

Due to the COVID-19 pandemic, the NBS said: “2,736,076 did not do any work in the last seven days preceding the survey due to the lockdown but had secure jobs to return to after the lockdown.”