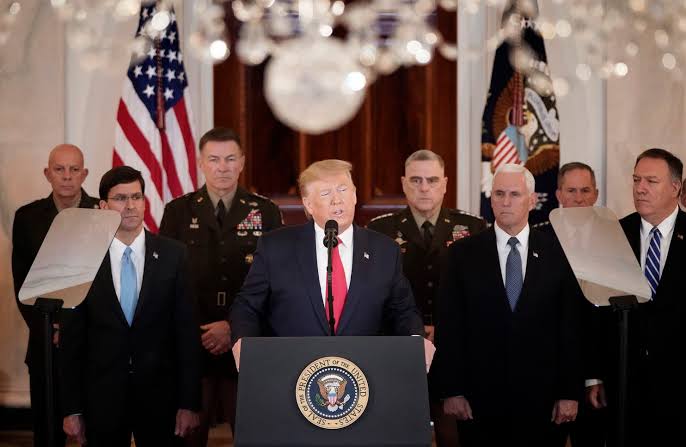 United States President Donald Trump has announced that no American was harmed in missile attacks by Iran on a military base used by American troops in Iraq.

The American President made this announcement in an address to the nation on the state of affairs with Iran.

“As long as I am the president of the United States, Iran will never be allowed to have a nuclear weapon.

“I am pleased to inform you the American people should be extremely grateful and happy, no Americans were harmed in last night’s attack by the Iranian regime.

“We suffered no casualties; all of our soldiers are safe and only minimal damage was sustained at our military bases. Our great American forces are prepared for anything.

According to Trump, no American or Iraqi lives were lost because of the precautions taken.

He stressed that the dispersal of forces and an early warning system that worked very well was enough to see that no casualties were recorded.

“I salute the incredible skill and courage of America’s men and women in uniform for far too long, all the way back to 1979 to be exact; nations have tolerated Iran’s destructive and destabilizing behaviour in the middle east and beyond, those days are over.

“Iran has been the leading sponsor of terrorism and their pursuit of nuclear weapons threatens the civilised world, we will never let that happen,” Trump stressed.

Trump further stated that the US will immediately impose punishing economic sanctions on the Iranian regime, adding that the powerful sanction will remain until Iran changes its behavior.

The Potus also said that he will ask NATO to become more involved in the Middle East process.