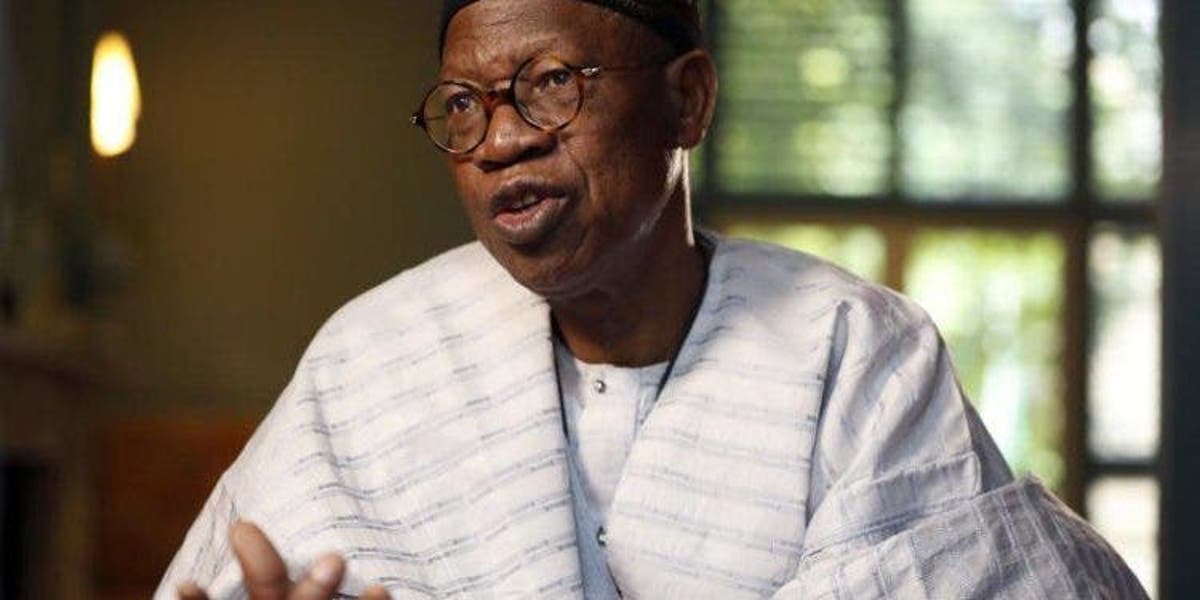 The federal government on Tuesday said there was no hidden agenda pertaining to the water resources bill being considered in the National Assembly.

Some groups, including the Nigeria Labour Congress, have called for the bill to be rejected. Nobel laureate, Wole Soyinka, has also been quoted as saying the country will be doomed if the bill makes it into the law books.

But in a joint press conference on Tuesday in Abuja, the Minister of Information and Culture Lai Mohammed and the Minister of Water Resources Engr. Suleiman Adamu, said many of those criticising the bill have “not even bothered to
read its provisions, thus depending on second-hand information to
reach their conclusions.

“Those who have read it have perhaps done so perfunctorily.”

The Ministers said the bill was designed to provide “professional and efficient management of all surface and groundwater” for the use of Nigerians.

“We also want to state that the Bill is for the good of the nation, and has no
hidden agenda whatsoever,” the Ministers added in a statement read during the briefing.

The Ministers on Tuesday said the water resources bill was not a novel idea.

“Gentlemen, there is nothing new about the National Water Resources Bill,” they said. “This is because it is an amalgamation of Water Resources Laws that have been in existence for a long time.”

So why are these laws being collapsed into one?

“The answer is that they are being re-enacted with necessary modifications to bring them in line with current global trends as well as best practices in Integrated Water Resources Management (IWRM),” the Ministers said.

“The overall objective of this amalgamation is the efficient management of the Water Resources Sector for the economic development of Nigeria and the well-being of its citizens,” including attracting private sector investment.

What are the issues?

The Ministers listed seven points made by critics and provided a response to each of them.

Criticism: The Federal Government is poised to take over the nation’s water resources by licensing and commercializing the use of water.

FG Response: “This is not the intention, because the current Water
Resources Act, 2004 (made pursuant to the Constitution) already makes
provision for this. This Bill is only trying to provide a framework
for implementing that provision. The Regulatory provisions of the Bill
require that commercial borehole drillers obtain a Licence. The Code
of Practice for Water Well Drillers issued by the Standards
Organization of Nigeria (SON) and the NWRI in 2010 already requires
this. The Code provides Technical requirements that a driller must
possess to undertake drilling as well as information on each such
borehole to be provided to the national database. That Code however
requires the License to be issued by the NWRI in Kaduna. This Bill
provides for such Licenses to now be issued by the States, under
the delegation of the National regulator, the Water Resources Regulatory
Commission.

Criticism: Nigerians will be prevented from access to potable water. Section 75 of the bill states that ”subject to the provisions of this Bill, no borehole driller, whether corporate or individual, shall commence borehole drilling business in Nigeria unless such driller has been issued a Water Well Driller’s licence by the Commission.”

FG Response: “Why is a technically-competent driller afraid of
obtaining a Licence? It is a Licence to practice, just as a medical
Licence or any other Licence to be obtained by people professing to
have the technical competence to do something. Most collapsed
boreholes are drilled by charlatans. It is therefore incumbent on the government to prevent this.

“On the provision of potable water, this is the responsibility of State
governments. The National Policy for water resources prioritizes
abstraction for water treatment in the allocation of water use. This
means that abstraction quantities required by state water Boards are
given priority in water allocation and the financing of infrastructure
by the Federal government for water development. Boreholes are the
same. Sections 76-79 of the Bill clearly provides that the States will
undertake this regulation under a national framework provided by the
regulator to ensure homogenous policy implementation.”

FG Response: Well, this is not a Physical Planning Bill. This bill
only relates to the management of water resources that crosses state
boundaries. The Constitution already grants the Federal Legislature
this responsibility (item 64, Exclusive Legislative List, CFRN 1999).
The Water Resources Act, 2004 lists the water bodies to which the Act
applies. This is maintained in the Bill. The interaction of the
The federal government with the State is only as it concerns the
management of the inter-state water that passes through the State. The
Bill does not apply to water that is wholly within the boundaries of a
State. The Bill also does not apply to Land. It clearly states that
Land required by any of the institutions established in the Bill will
be obtained in accordance with the Land Use Act (i.e with Governor’s
consent).”

Criticism: Based on the Supreme Court ruling, the provision of the Bill seeking to confer power on the Federal Government to give approval or licence for digging boreholes in any pact of the country is illegal and unconstitutional.

FG Response: “Well, to the best of our knowledge, there is no court
ruling on this. If there is, we are not aware that a case on borehole
licensing has been decided by the Supreme Court.”

Criticism: The Bill, when passed into law, will clip the
wings of state and local government authorities, as well as
individuals, from making use of the water in their backyards without
permission from Abuja

FG Response: “Communities on River Banks are guaranteed undisturbed
use of water as stated in Section 3 of the Bill. Also, all occupiers
of Land are guaranteed the right of abstraction for domestic and
sustenance, whether by borehole or rivers. Section 3 reiterates the
right of persons to continue to access water without charge for
subsistence and preserves existing customary rights to water. (see
Sections 1, 2, and 3 of the Bill). Section 2 of the Water Resources
Act, 2004 is reproduced. This section protects the right of persons to
use water for domestic purposes without charge and recognises the
right of a holder of customary or statutory right of occupancy to
access water for personal and household use but not for commercial
purposes.”

Criticism: The Bill is aimed at taking the resources of a certain part of the country for the use of herders. In other words, the Federal Government is seeking to implement RUGA by subterfuge.

FG Response: This is not the intent of the Bill and it is not even possible, as the Bill reiterates the fact that Land can only be acquired by any of the institutions established in accordance with the Land Use Act. Almost all the Institutions have State Representatives. The Regulatory Commission Board comprises representatives of the six-geo political regions. The State level basins management includes representatives of each state in the Basin.

Criticism: The Bill is capable of triggering ‘water wars’.

FG Response: “The misrepresentation of the contents and intent of the
Bill is a real cause for concern. The framework for managing and
regulating inter-state waters that is represented in the Water
Resources Policy, 2016 and this Bill are similar (in some cases
verbatim) with most international conventions and studies. It is the
same as in South Africa, Ghana, Sierra Leone, Zimbabwe, and most
developed Federal constitutions.

“‘Water Wars’ are more likely to happen between countries, while
internal conflicts on water occur typically between states in a
country. So it is not correct to say the Bill is capable of triggering
‘water wars’. Plus, the Bill contains provisions that will ensure that
internal conflict on water is averted.

“A possible source of internal conflict on the water is if an upstream
State decides to dam inter-state water, thereby preventing it from
following its natural course, thus affecting downstream users. On the
contrary, Bill is the only panacea to internal conflict on water.
For example, River Niger passes several states before emptying into the
Gulf of Guinea through the Delta. If any of the state’s dams it, that
can trigger water conflict. The Bill has taken this into
consideration. It provides, in Section 2 (3) for the Federal
Government’s right to the use and management control of all surface
water and groundwater affecting more than one state pursuant to the
provisions of the Constitution of the Federal Republic of Nigeria
1999, as amended. Contrary to what is being perpetuated, water
resources in a state that do not go beyond the particular state are
not regulated by this Bill.”