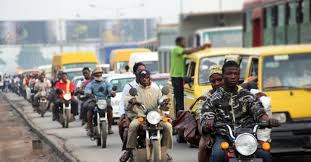 The Deputy Governor of Lagos State, Obafemi Hamzat, has revealed that motorcycles and tricycles popularly known as ‘Okada and Keke’, are being used to transport drugs to schools in the state.

Mr. Hamzat who was a guest on Channels Television programme, Politics Today on Wednesday, clarified the recent ban on Okada’s and Keke’s by the state government.

He explained that there has been an existing law on the operations of the transport scheme since 2012, stating that the regulation was reviewed in 2018.

The Deputy Governor maintained that according to reports from the 27 general hospitals in the state, an average of 28 deaths related to motorcycles were recorded on an average every month.

“We have 27 general hospitals in Lagos, on the average monthly, 28 deaths related to motorcycles.

“The issue of crime, we now found out that the tricycle and motorcycles are now the vehicles for transporting drugs to our schools; so the security of lives, the prosperity of our children cannot just be ignored.

“We cannot as a state government, see this data and say that it is not important. The essence is to make sure that everybody that resides in Lagos is secure,” he stressed.

Mr. Hamzat reiterated earlier positions of the state government that the move to ban Okada and Keke is not to punish or restrict people from doing any job.

“The essence is not to punish anybody, or to restrict people from doing any job but you have to be alive before you can make money.

“The reality is people are dying, the security of our children is being compromised, so Lagos government must act and that is what we are doing,” he maintained.