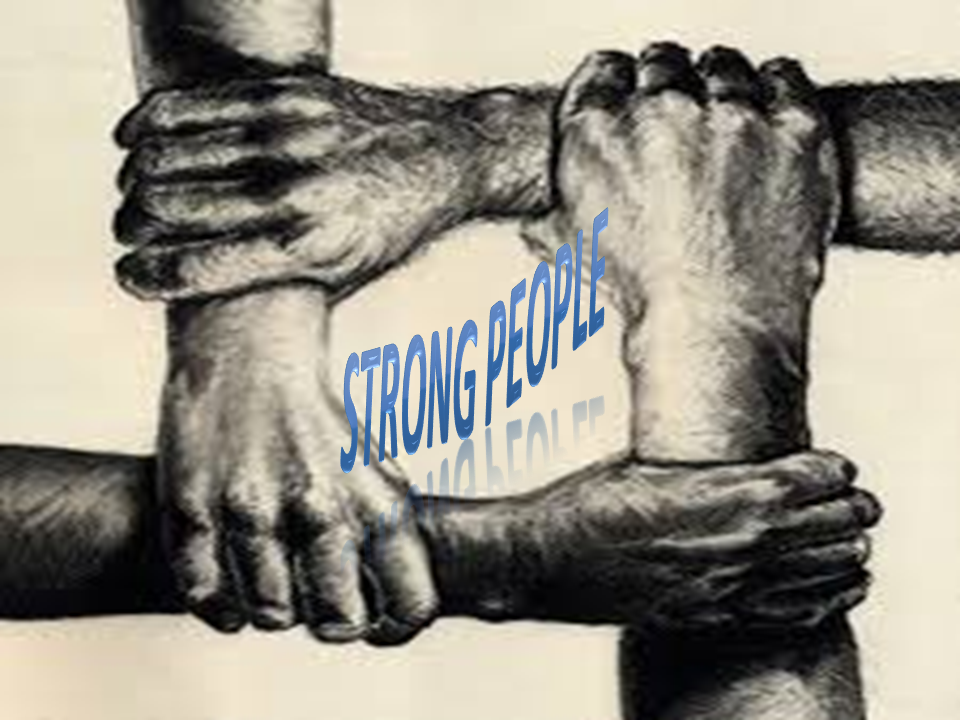 You have heard this over and over “let us allow strong institution, not strong individuals”…
I put it to you that that fallacy will never work anywhere in the world.
Only Strong men can FIX institutions.

Make no mistake, only #StrongMen can build #StrongInstitutions that will eventually run as though AUTOPILOT. #StrongInstitutions don’t happen in isolation anywhere in the world….
Gen 2:5 said something very instructive on how God made things to work here on planet earth: Gen 2:5 (NLT)
neither wild plants nor grains were growing on the earth. For the LORD God had not yet sent rain to water the earth, and there were no PEOPLE TO CULTIVATE THE SOIL.

Strong Institutions “Soil” will never CULTIVATE itself & become strong suddenly if there are no people! The principle of God for Strengthening Institutions from that Scripture is simple. Although The land has been there, although GRAINS & fruits had been created by God. UNTIL men are AVAILABLE to TILL the ground (i.e build strong institutions), the land will remain BARREN. Do not think this principle of strong men  building Strong Institutions is only coming up because we are Nigerians, NO. Read the history of Nations, only strong men at some point in time rose up & insisted that what was WRITTEN must be IMPLEMENTED, as such, such INSTITUTION STOOD.

Think about @NafdacAgency under late Dora Akunyili..
That institution had been there for years but very WEAK.
Until Dora arose, she arose like Deborah in Israel & EVERYBODY was forced to comply to what NAFDAC is all about. How did NAFDAC become a #StrongInsitution? Just one WOMAN ACTIVATED!

Think about Bureau of Pubic Service @bpsr_ng in Nigeria. That agency has been there for YEARS….UNTIL @DrJoeAbah arose, HE AROSE like Zerubbabel to BUILD strong institutions & suddenly that institution became the apple of our eyes..
We need strong men to build strong institutions.

Think about @CPCNig Consumers Council, have you heard much about it before?
Until this man @TundeIrukera arose, HE AROSE like Nehemiah to build #StrongInstitution out of that place, & suddenly we are hearing a bit of reformation of that same place….We need #StrongMen to BUILD!

Think about DATA, think about STATISTICS:
You know that you can’t mess up with National Bureau of Statistics of Nigeria ever since @sgyemikale arose, HE AROSE like Ezra the builder to build #StrongInstitution out of @nigerianstat ( Nigeria’s National Statistical Agency)
Now that same institution will eventually BUILD others.

Think about Vice President of Nigeria, Professor Yemi Osinbajo as though we never had office of VPs in the past.
Think about how the name “Justice Banjoko” suddenly made it seems as though we are all EQUAL before the law, & the law can deal with ANYONE.
Only strong people will build #StrongInstitutions.

If you think institutions will work irrespective of who occupy them, try and follow America and all kinds of Institutional breakdown just within three years of Trump. “If a home is calm, maybe the bastard among them is not yet of age” is an adage in Yoruba land. Do you know why Governors are messing up? Simply because there’s no strong House of Assembly leaders YET in almost every State.
House Of Assembly is supposed to check State Governors, if we have sensible Speakers, would any Governor dare spend bail out fund on any other thing?

Hate him like him, The only Minister I have seen strengthening Aviation since 1999 is @hadisirika
@ChibuikeAmaechi came up & #Railway lines are getting UP..
@tundefashola has no time for drama, roads, power housing getting big attention despite many challenges. Look at the progress Ajaokuta made under Fayemi as Minister within three years.