The year was 2019, @osita_chidoka was pushed by a masquerade who scolded him to pen down his memoirs of failure ahead of time.
In his ROBUST response, he ended up saying “Wait for my memoirs to read ringside narrative”.

Some plagiarist masquerading as Odumegwu Ojukwu asked who visited Pres. Buhari before projects were executed in the South East. Ordinarily I will not respond to a pseudo account. I respond to human beings whose manhood are alive but Nzeogwu & Ifeajuna asked me to say a few words

It was just his usual style of making everything a game of tribe & religion, so @osita_chidoka played his card again on that day to ridicule Buhari & to show his card of TRIBALISM again. A usual visit that different groups from different part of the Country USUALLY make in Aso Rock, Osita saw TRIBE superiority in this particular visit!

Tomorrow they will say Igbos hate Buhari. Other groups should learn from us
Kogi elders have no respect, they are getting 10bn no visit

This game of hypocrisy didn’t go well with their new masquerade on twitter who chose to call himself @ChiefOjukwu. So the guy came after him with enough receipt for @osita_chidoka. I won’t say Ossy bit more than he could chew on that day.

1. Ossy, kwusi ikwu okwu ka onye nzuzu (stop talking like a foolish person). Who visited @MBuhari for the Azikiwe Mausoleum to be completed? A contract awarded since 1996, you & your co-thieves in @OfficialPDPNig PDP stole money meant to honor a dead man until it was revived in https://t.co/VAZwVBrDs3 pic.twitter.com/tM7aMEEv1x

Instead of refuting what the masquerade with the handle @ChiefOjukwu said, @osita_chidoka simply repeated what the handle said by showing us where those FACTS were chronicled.
Then, in his attempt to rewrite history, Osita ended up writing Memoirs of failure of @OfficialPDPNig.

Usmanu Dan Fodiyo (1754-1816) was said to have made that statement: “Conscience is an open wound, only truth can heal it”. The more @osita_chidoka tries to rewrite history, the more history is preserved & he ended up writing in favor of the man he loves to hate…BUHARI.

Let’s check the Memoirs of failure that @osita_chidoka rushed himself to bring forward before time: Note that Osita himself was a product of Nepotism & tribalism clearly displayed by President Goodluck Jonathan regime to make such fellow Aviation Minister after being the failed FRSC boss appointed by Obasanjo then.

Remember that SCAM that @FRSCNigeria did where they asked Nigerians to pay extra for new vehicle number plates & how it would be a digital, personal, kinikan kinikan….Yea, Osita was around then. After that, he became Aviation Minister..NO EXPERIENCE in Aviation, yet Goodluck Jonathan appointed him as Nigeria Aviation minister. Was that the definition of Technocrat PDP has been talking about?

So @ChiefOjukwu pushed @osita_chidoka to pen down his own memoirs of failure on Twitter. Mr Ossy did more than that, he also told us the history of how Igbo leaders failed the people of the East for 16 years of alliance with @OfficialPDPNig…They couldn’t START & FINISH just one airport in 16 years!

So Mr Ossy started by telling us that the South East DID NOT VOTE FOR BUHARI. Ossy went ahead to tell us how accommodating Buhari was when they approached the man. I thought you said Buhari is a TYRANT & a DICTATOR. So he’s approachable by all despite political differences?

Osita went ahead to tell us that 2nd Niger bridge was STALLED in 2015. Ok, we are getting there: I thought they said Buhari was playing politics with 2nd Niger bridge…I thought Jonathan did it & Buhari didn’t do anything since 2015.

In other word, 2nd Niger Bridge was used as a political slogan UNTIL the same Buhari came in 2015 & since then, the project is becoming a REALITY. Ossy will write that in his memoirs of failure. @OfficialPDPNig failed the South East big time since 1999 just as they failed every region in Nigeria. QED!

That is 2nd Niger Bridge progress since Buhari came in. Yet they hate him and keep saying things are getting worse. The same people that celebrated Jonathan commissioning the map of 2nd Niger Bridge….Ki le n fe gan. Is the hate justifiable?
Can you justify you bitterness? pic.twitter.com/8SP6i2BAV4

So @osita_chidoka simply confirmed what we have been saying: The past leaders played politics with 2nd Niger bridge project, Buhari is the one DOING the project and without making much noise. If you have any other picture, show us because People’s Democratic Party cannot show us visual clips of pace of on going work on 2nd Niger Bridge in 16 years except this drawing . Your memoirs of failure is easy to read by all. 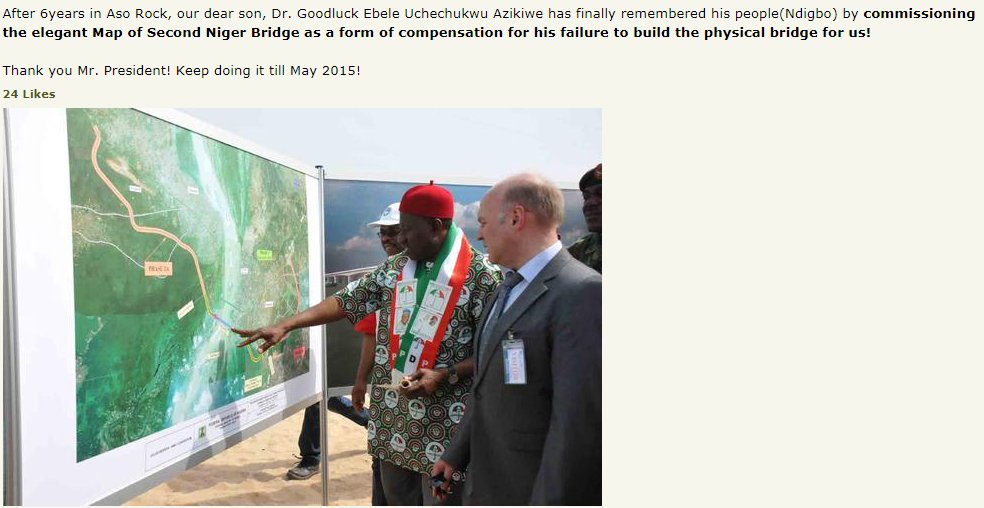 Ossy told us how the leaders went there to talk about appointment & the response of President Buhari. Ossy did not dispute the statement Buhari made, FACT is enough to knock out fallacy. So you people want to work with INCOMPETENCE of Buhari in Aso Rock?

Here is the most unfortunate memoir Mr Osita Chidoka started to write in defense of his failure & that of his party….#EnuguAirport, Roads & other issues. So what Osita just admitted to is that 16 years of PDP was not enough to START & FINISH ENUGU AIRPORT? Osita chronicled how the South East Governors came to meet Buhari on projects that have been in existence long before 1999, and 16 years was not enough to START & FINISH any of those projects in the South East. So, we are now on the same page.. To START & FINISH just one major project in 16 years was impossible for PDP.

They asked Buhari…“We requested that he should take over the compensations of the affected lands”… Again, the compensations were not paid even when Goodluck Jonathan from the region was in power, but Buhari should get the East compensation done. Thank you PMB because you have been doing that now and history will not erase that.

Look at the shameful stuff: “Enugu Airport runway expansion was awarded in 2009 by Minister Omotoba at N4.13 billion”… From 2009 to May 2015, that project was not COMPLETED. Crude oil average in that period was $100 per barrel and the President was from Niger Delta.. SHAME!

In one sweep just like that, @osita_chidoka thinking he was saying something logical INDICTED Senator Ekweremadu the deputy Senate President then and other lawmakers from the region: According to the testimony of Mr Osita, CONSTITUENCY PROJECT was and is still a scam. How could you CONTRIBUTE/DIVERT funds meant for “constituency project to AIRPORT? It meant they had access to the fund and could decide what to do with such much. Which budget approved that and which constitutional power gave them such privilege? Constituency project has always been a scam.

14. To avoid abandonment Sen Ekweremadu rallied Igbo legislators who all contributed their constituency project to the Enugu Airport. Total contribution was below the 15% of the original cost, so it was redesigned to N4bn to pass through BPP who insisted on budgetary provision

“When they ask you what Igbos did send them to me”…..Osita Chidoka

Dear Sir @osita_chidoka, I am sending myself to you, kindly show me what Igbo did since 1999 despite being in alliance in the South East with PDP. What did Igbo leaders do for 16 years to get East roads in good shape? Please tell me! 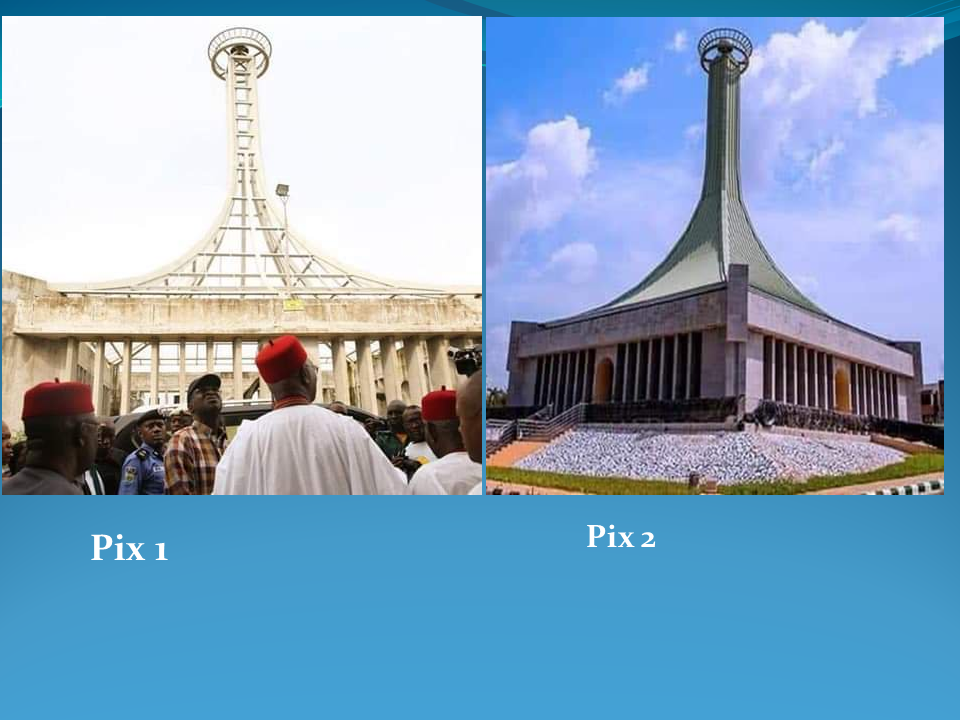 Ike River on the Nenwe-Oduma-Uburu FG road project, connecting Enugu and Ebonyi could not be STARTED & COMPLETED within 16 years of PDP and you were part of that administration. 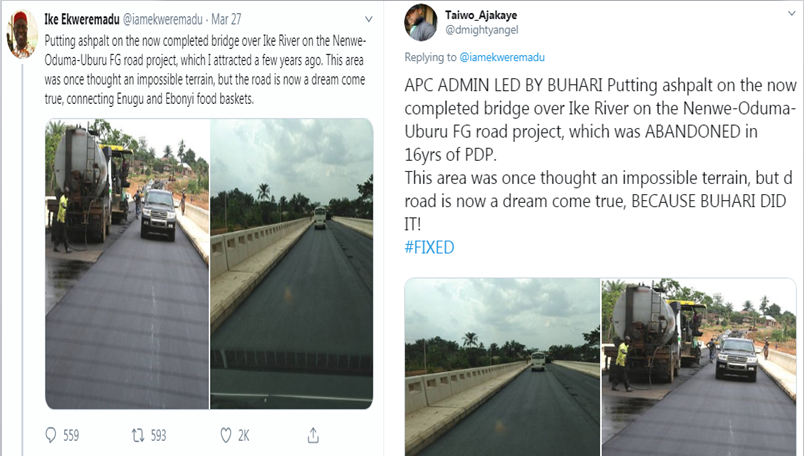 Please what did Igbo leaders do to get such done in 16 years? NOTHING. Guess what, Buhari did it…#Memoirs

Mr Osita kept writing the failures of the past Aviation ministers and how you guys were so unprofessional in your dealings, yet you thought you have said something logical. How did Nigeria get to a point that your types had opportunity to do something, yet those things were UNDONE?

Osita Chidoka chronicled about three Aviation ministers, all from the South East, yet Enugu airport was never achieved and he wrote all these with pride? Ok, now that you have told us about your failures to at least be useful to your region if you couldn’t cope with the entire Nation, should we clap for your failures?

On allegation of corruption against Osita, Osita said “All his allegations were copied from the 2018 stories arising from the EFCC charge sheet”…Yen yen yen…. So you have confirmed that the guy was actually correct in all he said, all you are doing is to dance naked in the market after being exposed.

You were always in the link with those who ruined this Nation in the past, so I understand your struggle to defend Atiku & others…Don’t worry, Atiku told us everything went down the DRAIN. Your memoirs of failure is well received.

One more thing, don’t waste your time writing your memoirs of failure, history cannot be altered by your writing. All of you suddenly woke up after 2015 to be writing memoirs of how you guys were the only saints in the midst of everything, Goodluck Jonathan wrote his, Okonjo Iweala wrote, Adoke wrote and you are already writing your to distort history. To thyself, be truthful…YOU FAILED!