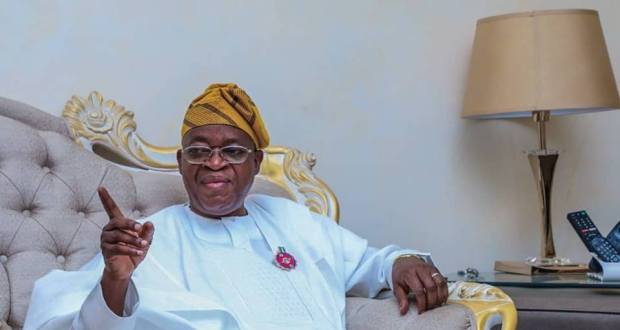 Osun State Governor, Adegboyega Oyetola, has reiterated his administration’s commitment to completing the reconstruction of Osogbo-Iwo road. He said the administration would prioritise infrastructure, noting that the state was committed to ensuring good roads across Osun.

Governor Oyetola spoke on Thursday at the commissioning of ‘Telu Square’, in Iwo, a tower built by Oluwo to commemorate his 4th year coronation anniversary.

Oyetola Oyetola who described infrastructure as key to development held that the state would ensure the completion of all the ongoing roads. “Our administration is committed to completing the Osogbo-Iwo road. We are not doing this alone.  All the ongoing projects will be completed and we will equally initiate more. “We are determined to embark on mass road projects across the state to complement those we are doing now”, Oyetola said. He commended Oluwo for complementing the government’s efforts, describing the gesture as remarkable and worthwhile. “I must commend you for your foresight to construct this.

Oyetola Earlier in his address, Oluwo of Iwo, Oba Abdul-Rasheed Adewale Akanbi, described the project as a way to solidify a new virile foundation for Iwo and give the town a modern facelift of development.

He also noted that the tower would serve as a tourist site and add to the aesthetic values of the ancient town. Oba Akanbi urged the people of Iwo to continue to support the administration of Governor Oyetola.