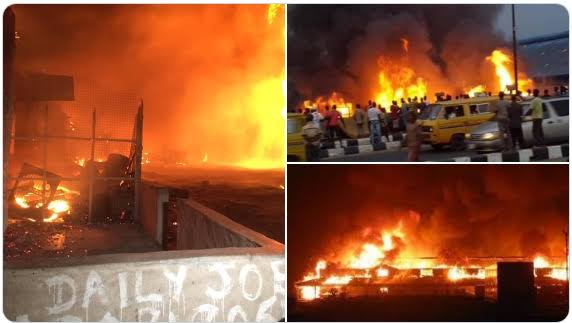 A pipeline explosion at Ile Epo around the Abule Egba area of Lagos has sent many persons scampering to safety.

The area was sent into a frenzy as the pipeline burst into flames.

Many concerned Nigerians took to social media giving updates on the development.

According to some of those who made posts online, the fire service was yet to get to the scene of the incident close to an hour after the fire broke out.

As at the time of filing this report it was unclear what caused the pipeline to explode though some suggest that it is due to acts of vandalism.

It is also yet to be ascertained if there are any casualties and what extent of damage has been done to the surrounding properties.

The Ile Epo fire is coming barely weeks after properties worth millions of naira were destroyed in an early morning explosion at the same Abule Egba area of Lagos State.

Vehicles, houses, and offices were destroyed in the explosion.

Security agencies disclosed that the number of human victims could not be ascertained but many were left injured in the explosion.

The Lagos State Emergency Management Agency’s (LASEMA) on its official Twitter handle said the explosion was a result of oil spillage from what appears to be bunkering activities that came in contact with an ignitable source.