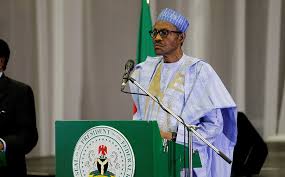 President Muhammadu Buhari has reacted to the increase in the price of Premium Motor Spirit (PMS), also known as petrol, by oil marketers in the country.

He explained why the country has found itself in such a situation, as well as why the Federal Government cannot afford to pay fuel subsidy at this time.

The President gave the explanation on Monday at the first-year Ministerial Performance Review Retreat which held at the Conference Centre of the Presidential Villa in Abuja.

“There are several negative consequences if the government should resume the business of fixing or subsidising PMS prices. First of all, it would mean a return to the costly subsidy regime,” said President Buhari who was represented at the event by the Vice President, Professor Yemi Osinbajo.

He added, “Today, we have 60 per cent less revenues; we just cannot afford the cost. The second danger is the potential return of fuel queues – which has, thankfully, become a thing of the past under this administration.

“Also, as I hinted earlier, there is no provision for fuel subsidy in the revised 2020 budget, simply because we are not able to afford it, if reasonable provisions must be made for health, education and other social services. We now have no choice.”

The President’s explanation comes against the backdrop of the outrage triggered by the increase in the pump price of petrol – one which was widely condemned by various individuals and groups in the country.

While the Pipelines and Product Marketing Company (PPMC) reviewed the ex-depot price of petrol from N138.62 to N151.56 per litre in September, a majority of oil marketers were selling above N160 per litre.

A fuel station in Lagos sells petrol at N162 per litre.
The Long-Term Gains
For President Buhari, the COVID-19 pandemic, which has affected economies globally, has compelled the government to make some adjustments which he described as far-reaching.

Although he admitted that such reviews would cause some initial pain for the people, he insisted that they were necessary for the long-term gains.

“As you all know, when oil prices collapsed at the height of the global lockdown, we deregulated the price of Premium Motor Spirit (PMS) such that the benefit of lower prices was passed to consumers.

“This was welcome by all and sundry. The effect of regulation though is that PMS prices will change with changes in global oil prices. This means, quite regrettably, that as oil prices recover, we would see some increases in PMS prices,” he stated.

A file photo of an attendant filling the fuel tank of a car.

The President, however, gave an assurance that the government would remain alert to its responsibilities.

According to him, the role of the government now is to prevent marketers from raising prices arbitrarily or exploiting citizens.

President Buhari stressed that this was why the PPRA made the announcement last week to set the range of price that must not be exceeded by marketers.

“The advantage we now have is that anyone can bring in petroleum products and compete with marketers, that way the price of petrol will keep coming down,” he said.