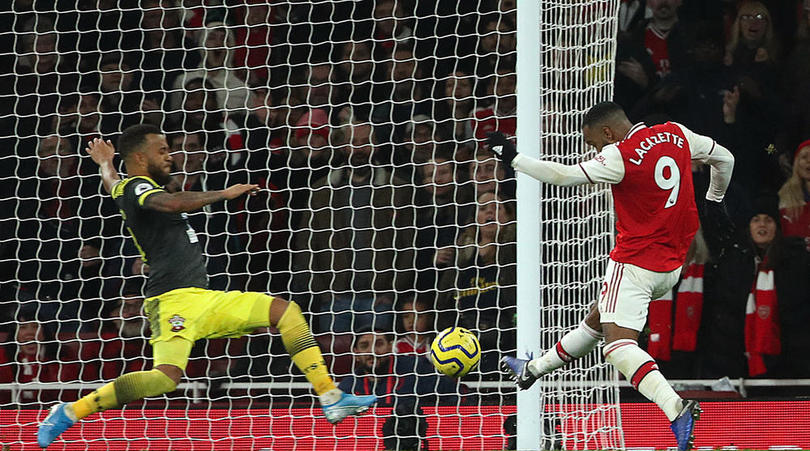 Unai Emery may have got the backing of the Arsenal hierarchy during the international break but this can’t be allowed to go on any longer.

This latest draw – at home to a Southampton side who arrived at Emirates Stadium sitting 19th in the Premier League and without a win in seven games – really should make Emery’s position untenable.

The widespread boos that met the final whistle said it all. And they would have been far louder had Alexandre Lacazette not prodded home a 97th-minute equaliser to make it 2-2 and rob the visitors of what would have been a thoroughly deserved three points.

Arsenal have now gone five games without a win in the league. They have scored just 18 goals in their first 13 games and they have conceded 19. We are about to enter December and Emery’s side have a negative goal difference.

It simply isn’t good enough and head of football Raul Sanllehi, managing director Vinai Venkatesham and the Kroenkes have to recognise that and make a change.

“We are as disappointed as everyone else with both our results and performances at this stage of the season,” said Sanllehi and Venkatesham in a statement released by the club at the start of the international break.

“We share the frustration with our fans, Unai, players and all our staff as they are not at the level we want or expect.

“Things need to improve to meet our objectives for the season and we firmly believe Unai is the right man for the job.”

The fact that statement came less than two weeks ago may put Arsenal in a difficult position, but they have to admit they were wrong and cut Emery loose.

As they have been for much of the season, the Gunners were wretched against a Southampton side who just a matter of weeks ago were thumped 9-0 at home by Leicester.

This is not a group of players who are playing for their head coach. No matter what they are saying publicly, Emery has lost the dressing room – just as he has the majority of the fanbase.

The fact that he was forced into a change of system at half-time sums up the problems Arsenal are facing right now.

Exactly why he believed playing three centre-backs was the right option against a team sitting second from bottom in the Premier League only he will know, but it was clearly the wrong decision – especially with a midfield pairing of Matteo Guendouzi and Lucas Torreira in front of them.

It meant that Arsenal started the game, at home, with just three out-and-out attacking players in Mesut Ozil, Pierre-Emerick Aubameyang and Lacazette and so it was no surprise to see the hosts struggling to create anything of note.

They were fortunate to go in at half-time level at one goal apiece. Lacazette’s equaliser after Danny Ings had opened the scoring was one of only three shots Arsenal could muster in the first half. Southampton, meanwhile, had 10.

Nicolas Pepe replaced Calum Chambers at the break, with Arsenal switching to a 4-2-3-1 system, and there was certainly an improvement in an attacking sense.

Pepe missed two golden chances to put the hosts in front, but Southampton were always a threat on the counter and they restored their lead from the penalty spot after Kieran Tierney had fouled Ings.

With 20 minutes remaining, you would have expected a reaction from Arsenal – but it never came. In fact, Southampton could – and should – have scored several more, wasting a hatful of chances to wrap things up.

And they were made to pay deep into seven minutes of stoppage time when Lacazette prodded home at the back post after Gabriel Martinelli’s cross had found its way to the France International.

Could that be the goal that keeps Emery in his job? It shouldn’t be, but it might.

If the late leveller does prolong his stay, then serious questions should be asked of Sanllehi and the powers that be in north London. Exactly what are they seeing that suggests Emery can turn things round?

Arsenal are a mess and it’s clear to see. If Sanllehi – who spent a decade as director of football at Barcelona – can’t spot that, then it is as big a worry as the football that Emery’s side are serving up on a weekly basis.