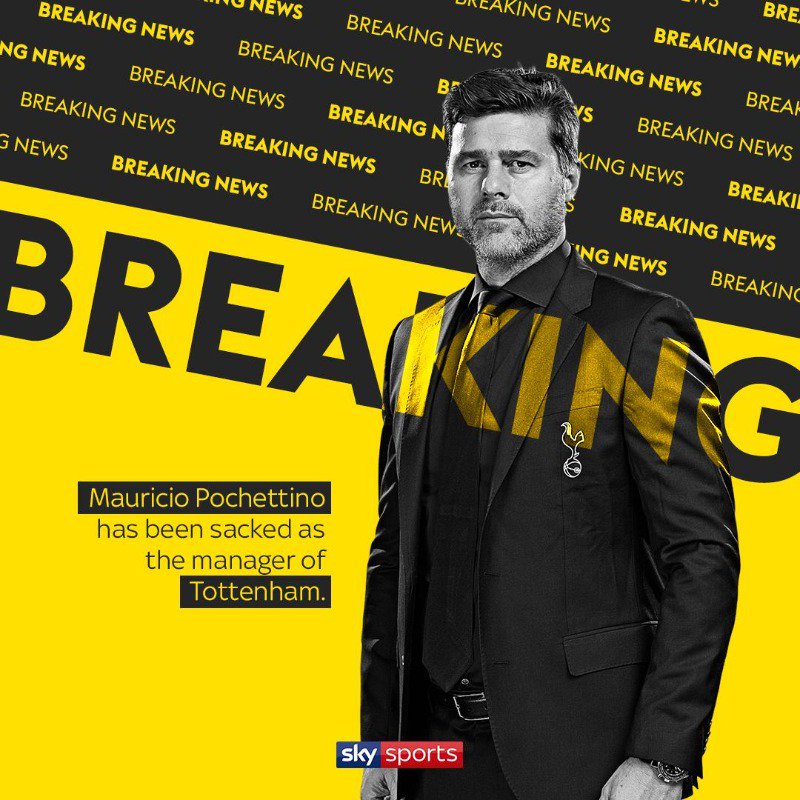 Tottenham Hotspur have confirmed that Mauricio Pochettino has been sacked.

Pochettino, 47, join Spurs in 2014 and oversaw one of the most successful periods in the club’s history, establishing them as regulars in the Champions League after many years under performing.

He also helped the development of players like Harry Kane and Dele Alli.

However the past year has been difficult for the club with transfer funds limited due to the new stadium with results on the pitch fading away, the team currently sits in 14th in the Premier League.

Pochettino hasn’t been afraid to air his displeasure with the situation and now he has been relieved of his duties.

“The Club can today announce that Mauricio Pochettino and his coaching staff Jesus Perez, Miguel D’Agostino and Antoni Jimenez have been relieved of their duties,” A statement from Tottenham read.

Chairman, Daniel Levy, added: “We were extremely reluctant to make this change and it is not a decision the Board has taken lightly, nor in haste.

“Regrettably domestic results at the end of last season and beginning of this season have been extremely disappointing.

“It falls to the Board to make the difficult decisions – this one made more so given the many memorable moments we have had with Mauricio and his coaching staff – but we do so in the Club’s best interests.

“Mauricio and his coaching staff will always be part of our history. I have the utmost admiration for the manner in which he dealt with the difficult times away from a home ground whilst we built the new stadium and for the warmth and positivity he brought to us. I should like to thank him and his coaching staff for all they have contributed. They will always be welcome here.

“We have a talented squad. We need to re-energise and look to deliver a positive season for our supporters.”

The news comes after frequent grumbling by Pochettino about the lack of spending, one of the more notable incidents saw him speculate on his own future just before last season’s Champions League final against Liverpool.

However he stayed put and Spurs spent big on Tanguy Ndombele and Giovani Lo Celso in the summer but neither the results nor the atmosphere improved.

His relationship with Levy was reportedly fraught given the disagreement between the pair about how the club should invest.