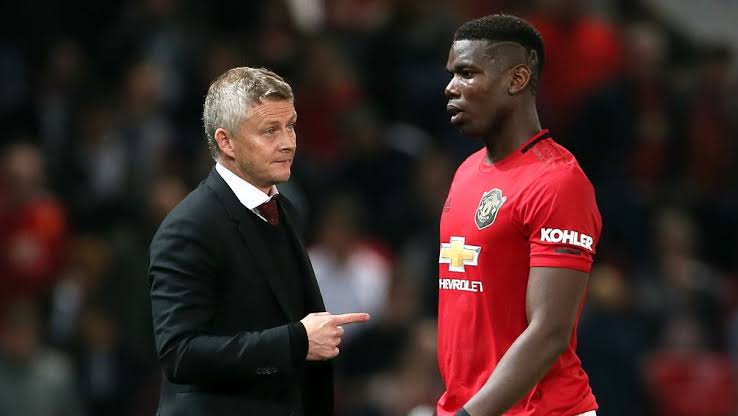 Paul Pogba’s agent, Mino Raiola, has hit back at Ole Gunnar Solskjaer over the Manchester United manager’s claims that the midfielder belongs to the club.

A foot injury has kept Pogba out of action since late December, limiting him to just seven Premier League appearances this season.
His struggles at Old Trafford have raised speculation that he could be on his way out and Raiola added fuel to the fire last week when he hinted that the France star could return to Juventus at the end of the season.

Solskjaer responded to Raiola’s claim by stating that the Red Devils are in control of his future, telling reporters: “I’ve not spoken to Mino, that is for sure. And, no, I haven’t sat down and told Paul to tell Mino what he should say
“Paul is our player and not Mino’s.”
And Raiola took to Instagram to take a dig back at Solskjaer on Monday evening, reminding him that the France star is his own man.

“Paul is not mine and for suree not Solskjaer’s property, Paul is Paul Pogba’s,” Raiola wrote.
“You cannot own a human being already for a long time in the UK or anywhere else. I hope Solskjaer does not want to suggest that Paul is his prisoner.
“But before Solskjaer makes comments about things I say he should inform himself better about the content of what has been said.

“I am a free citizen who can think and express my thoughts. Until now I was maybe too nice to him. Solskjaer should just remember things that he said in the summer to Paul.
“I think Solskjaer may be frustrated for different reasons and is now mixing up some issues.

“I think that Solskjaer has other things to worry about. At least if I was him I would.”
Pogba has been consistently linked with a move away from Old Trafford. The 26-year-old suggested last summer that he wanted to leave the club, while Real Madrid have been long-term suitors as well as Juve.
The midfielder’s contract at the club expires in the summer of 2021.