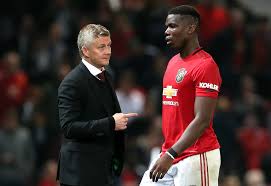 The France international has been constantly linked with a move away from Old Trafford ever since he returned from Juventus in 2016.

Pogba is said to be unhappy at United because of their failure to challenge for the Premier League title and eager to leave the club at the earliest opportunity.

His agent, Mino Raiola, said last month that the midfielder is only committed to the club until this summer, while Real Madrid and Juve are said to be interested in signing the 26-year-old.

Pogba’s fitness issues this season have only increased speculation surrounding his future. He has been limited to just eight appearances in all competitions this season for the Red Devils, having been out since the end of December with an ankle injury.

Solskjaer said this week, however, that he expects the World Cup winner to be back working with his team-mates next week.

And the Norwegian reiterated on Thursday that the star player is going nowhere in the next transfer window as he remains contracted to United until 2022.

“Paul’s our player. He has two years left on his contract, a year plus the option of another,” Solskjaer said after his side’s 5-0 win over LASK in the first leg of their Europa League last-16 tie.

“You can expect Paul to be here [next season], yeah.”

United’s form has improved in recent weeks despite the absence of their most expensive signing.

Thursday’s win in Austria extended their unbeaten run to 11 games in all competitions and all but ensures their progress to the quarter-finals of the Europa League and they are now in fifth place in the Premier League.

January signing Bruno Fernandes has been touted as an inspiration for their recent improvement and some have claimed that the Portugal international has displaced Pogba as the team’s star in midfield.

Former player Paul Ince has said the club do not need Pogba anymore now that they have Fernandes, while Gary Neville says the midfield has gone from “pathetic” to “thriving” since the ex-Sporting star arrived.