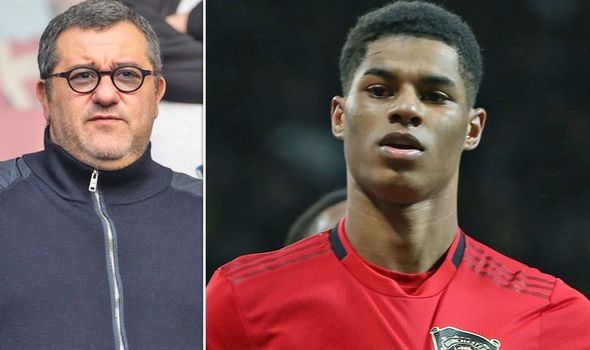 Rene Meulensteen has expressed his belief that it would be a “really strange” move for Marcus Rashford to appoint Mino Raiola as one of his representatives.

Rashford has emerged as arguably United’s most important player this season, with 19 goals to his name from 29 appearances across all competitions.

The 22-year-old signed a new four-year contract at Old Trafford back in July, and the Red Devils have the option to extend his stay for a further year beyond that.

However, as his profile continues to grow, rumours over his future in Manchester have inevitably followed, with La Liga giants Real Madrid and Barcelona among those credited with an interest in his services.

At the moment, Rashford is represented by his brothers Dane Rashford and Dwaine Maynard, but both men reportedly sat down with Raiola to discuss adding him to the team last year.

Raiola currently serves as Paul Pogba and Jesse Lingard’s agent, with the latter now being linked to a number of clubs in Italy following his decision to hire the 52-year-old.

Former United first-team coach Meulensteen hopes Rashford will avoid treading the same path as his team-mates, insisting Raiola already has far “too much control” behind the scenes at Old Trafford.

“It’s really strange to me,” Meulensteen told TalkSPORT. “Sometimes these agents get far too much control, but that’s just how the system works, unfortunately.

“It’s crazy and it causes problems for managers. I think a club the size of Manchester United should be able to look after that themselves.

“Pogba was already with him, but now Lingard is going and Rashford… it’s not a good development in my opinion.

“His way is Raiola first and then the player, and not the interest of the club.”

It has has been suggested that United officials are “sick to the core” of Raiola, who recently launched a scathing attack on the club for how they have treated Pogba since his return to the club in 2016.

Raiola has vowed never to allow another one of his clients sign for the Red Devils, claiming they “would even ruin [Diego] Maradona, Pele and [Paolo] Maldini”.

However, Meulensteen believes Raiola is more concerned with personal gain than making sure his clients are happy, recalling how he engineered Pogba’s move to Juventus back in 2012.

“The pathway of the players in terms of where they want to play and their development, that’s the way United have worked all these years and that’s exactly how we did it when Pogba first left the club,” the Dutchman added.

“We had a fantastic plan in place for Paul, who was just coming onto the scene in the first team.

“It was a great pathway with all the benefits that went with it, but obviously he went to Juventus because it was a deal struck by Raiola and he was making sure he looked after himself.”