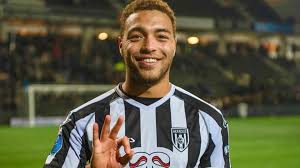 Gernot Rohr has lifted the lid on the invitation of Heracles Almelo striker Cyriel Dessers and FC Koln right-back Kingsley Ehizibue to the Nigeria national team.

The pair were among the 24-man list released by the Super Eagles coach for their Africa Cup of Nations qualifiers against Sierra Leone this month.

Dessers has been turning heads in the Dutch top-flight, scoring 15 goals and providing five assists in 26 appearances amid other dazzling displays.

Ehizibue, meanwhile, has been a consistent performer for FC Koln in Germany, helping his side to 10th spot in the league table, with his solid defensive showings.

Rohr revealed the eye-catching form of the duo ensured they were handed their first call-ups to the Super Eagles and praised his scouting crew for their efforts.

“We try to build a good list and we could approach these two players [Cyriel and Kingsley],” Rohr told AOI.

“We met them, we spoke to them and explained how the spirit in the team was, how we play and they were okay with it.

“We had good observation of all the players, the scouting team did a lot of work and I saw them play myself.

“Last week I was with the agent of Kingsley in Koln and I also met with Dessers in London.”

The Super Eagles are leading Group L with six points after victory against the Republic of Benin and Lesotho.