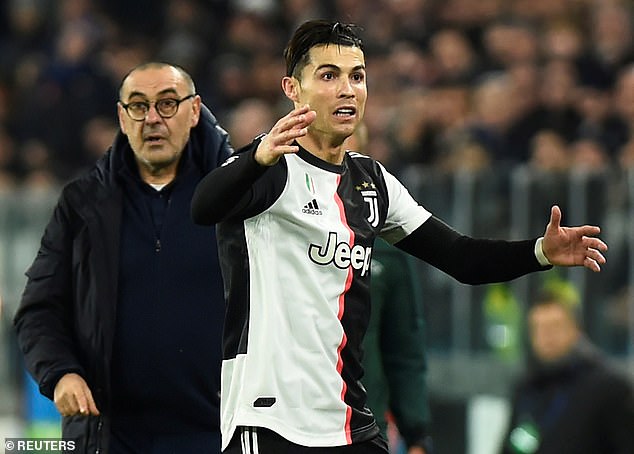 The former Italy international believes tension between superstar player and demanding coach is building in Turin, with cracks starting to form
Cristiano Ronaldo looks to have “a big problem” with Maurizio Sarri, claims Antonio Cassano, with a Portuguese superstar left irritated by recent decisions from the Juventus coach.

Those decisions were put down to fitness issues, with Ronaldo said to be nursing a knee complaint.

That ailment kept the 34-year-old out entirely for a Serie A showdown against Atalanta, although he did return for a Champions League meeting with old adversaries Atletico Madrid.

Ronaldo also saw 90 minutes in a 2-2 draw with Sassuolo on Sunday, with his first Juve goal since October 30 recorded in that contest.

Sarri has admitted that his star man needs to “recover the brilliance”, although he has played down reports of a rift in the Bianconeri camp.

Former Italy international Cassano is not buying that argument, with the ex-Real Madrid forward of the opinion that divides are starting to form in Turin.

He told Tiki Taka: “I think Ronaldo has a big problem with Sarri.

“Everything started with two consecutive substitutions, which will irritate any player.

“In my opinion, there’s a problem between them and Juventus are good at keeping it down.”

The Ronaldo-Sarri debate is not the only issue that Cassano believes Juve need to iron out.

He says the Serie A champions should be looking to drop Wojciech Szczesny back down to bench duty, with 41-year-old World Cup winner Gianluigi Buffon – who rejoined the club over the summer – still the “better” goalkeeper.

The ex-Roma and AC Milan star added: “Buffon should play, because he remains a better option than Szczesny.

“He was always benched at Arsenal and was a back-up to [Manuel] Almunia and [Lukasz] Fabianski. At Roma, he had a good year, while now he is in his first year as a starter.

“Anyway, right before Gigi’s mistake [against Sassuolo], it needs to be said that [Matthijs] De Ligt made yet another error.”

Netherlands international defender De Ligt has struggled for form since making a big-money move to Italy, but claims to be feeling more settled as he adjusts to the demands of performing under the brightest of spotlights.