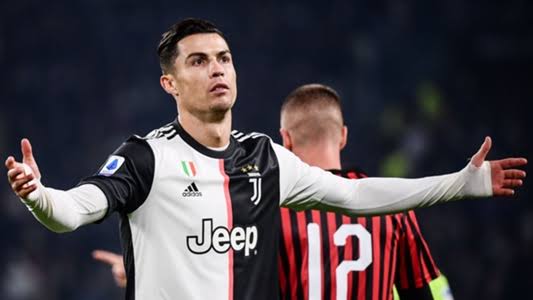 The forward was angry at being substituted by Maurizio Sarri at the weekend, but his international team-mate insists he is fine now.

Ruben Neves is not concerned about Cristiano Ronaldo’s state of mind for Portugal despite a difficult week at club level with Juventus.

Ronaldo, 34, was substituted in each of Juve’s past two matches before the international break and is reported to have left the stadium early when hooked in Sunday’s 1-0 win over AC Milan.

Paulo Dybala came on for the Portugal talisman against Milan and went on to score the winner, with Ronaldo visibly annoyed as he headed straight down the tunnel when replaced by the Argentina international.

Juve head coach Maurizio Sarri put Ronaldo’s withdrawals down to a bruised knee, though the forward still received criticism for his reaction.

Wojciech Szczesny said Ronaldo’s anger was understandable, but he appears to have mellowed since linking up with Portugal.

Speaking ahead of Thursday’s Euro 2020 qualifier against Lithuania, Neves said: “Cristiano is fine, had a great training session, as always, and he has a great motivation for the match.

“He’s fully prepared for the match. I guess he has no idea of what people are talking about.

“He had a fine training session, as I’ve already said, so I guess we can expect the Ronaldo we always see in the game tomorrow.”

Portugal manager Fernando Santos echoed Neves’ thoughts on the captain’s fitness, confirming that he will play in the upcoming games against Lithuania and Luxembourg.

Meanwhile, Wolves midfielder Neves has continued to impress this season after catching the eye in the Premier League last term, but it was put to him that he seems more reserved when wearing a Portugal jersey.

He is convinced that is a misconception, however, adamant he feels just as productive for the Selecao as he does for Wolves.

“No, no,” Neves said. “We have lots of matches with Wolves. If we compare my number of matches and goals for Wolves and the same for Portugal, the difference won’t be big.

“So, I’m focused on helping my national team all the times I’m called up and don’t have anything more to say about this.”