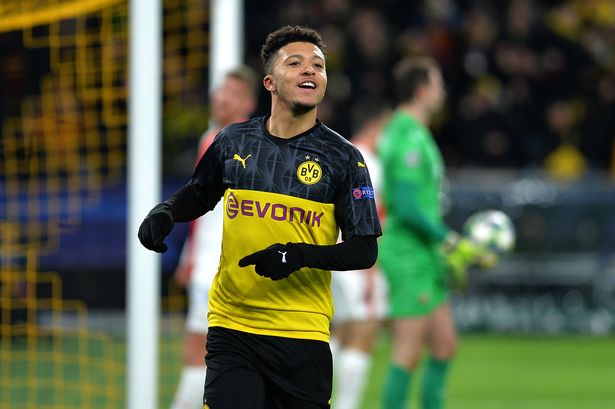 Jadon Sancho has become the youngest player ever to score 22 Bundesliga goals, as the Borussia Dortmund star netted in a 3-3 draw with RB Leipzig on Tuesday.

The 19-year-old grabbed an assist in the first half at Signal Iduna Park when he played a ball for Julian Brandt, who gave his side a 2-0 lead with a wonderful turn and finish from close range.

That lead would be erased early in the second half, though, as Timo Werner grabbed two quick goals to level the score at 2-2 by the 53rd minute.

Sancho would find the go-ahead goal just two minutes later, as the England international got on the end of a Marco Reus pass before taking a touch and slamming home from close range.

It wasn’t all good news for Sancho on Tuesday, though. In the 71st minute he was forced off with a muscle injury, as he was forced to hobble off to be replaced by Lukasz Piszczek.

Leipzig then found a leveller through Patrik Schick in the 77th minute, ensuring the spoils would be shared on the evening.

Sancho scored his first Bundesliga goal in the 2017-18 season before making a major breakthrough last term, netting 12 times in the league for Dortmund.

He looks poised to surpass that mark in 2019-20, with the teenager having already found the net nine times in Bundesliga play this season.

Sancho has been particularly prolific after the mid-November international break, with the former Man City player having scored eight goals and added five assists in just six games in all competitions.

The England star scored against both Barcelona and Slavia Prague in the Champions League, as Dortmund advanced out of their group to seal a last-16 matchup with former boss Thomas Tuchel and PSG.

In the Bundesliga, Tuesday’s result means Dortmund remain in third place, four points back of table-topping RB Leipzig and one point behind second-place Borussia Monchengladbach.

Following Friday’s match against Hoffenheim, Dortmund will begin their winter break and won’t have another game until January 18, when they face Augsburg.