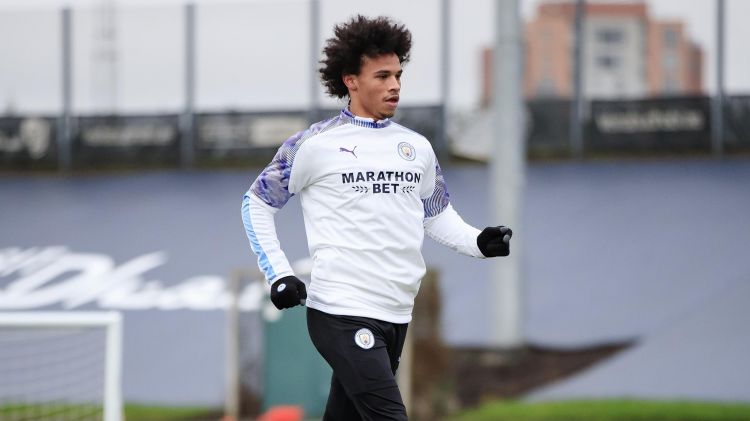 Pep Guardiola says he expects Leroy Sane to return to full training “in another week”, after missing the first half of the 2019-20 campaign due to knee ligament damage.

Sane hobbled off the pitch after just 10 minutes of City’s Community Shield victory over Liverpool on August 4, with club doctors later confirming he had suffered an ACL (anterior cruciate ligament) injury.

The 24-year-old was subsequently ruled out of action for six months, which came as a huge blow to the club given his contribution to their treble-winning 2018-19 season.

The Citizens have not been able to maintain their domestic dominance in Sane’s absence, slipping 14 points behind current top-flight leaders Liverpool – who are on course for a first league crown in 30 years.

City are, however, still going strong in three other competitions, with Guardiola set to welcome back a prized asset as a huge Champions League tie against Real Madrid begins to loom large on the horizon.

When asked if he had any positive new on Sane’s recovery, the Spanish tactician told a press conference on Friday: “Definitely. Leroy is still not training with us but everything going really really well and he should be training with us in another week.”

City still have seven fixtures to play before kicking off their last 16 tie against Madrid on February 26, starting with another crucial Premier League clash this weekend.

Roy Hodgson’s Crystal Palace are due to arrive at Etihad Stadium on Saturday afternoon, where City will be looking to extend their recent winning run to six matches.

Guardiola went on to praise 72-year-old Hodgson for his “passion”, before admitting that he doesn’t plan to match the Englishman’s longevity in management.

“Of course I admire him, it is incredible to still have the passion to be a manager at his age,” he added. “It’s incredible and he’s doing really well and yet he took over when they had zero points and everyone considered Crystal Palace relegated.

“He is doing an incredible job and it’s a pleasure and an honour for me every time we face him, we have a good relationship.

“I am interested in other things and I think I am going to do them when I am not a manager but I enjoy being a manager.

“If I still like it and have an offer and still have the passion, and I’m comfortable, then yeah.

“I didn’t say I’m going to retire the next week or the next year. I don’t think I will still be a manager at this age but I don’t know.”