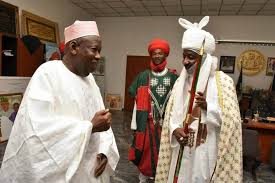 Lawyers of the deposed Emir of Kano, Muhammadu Sanusi (II), have threatened to take legal action if the state authorities don’t release him within the next 24 hours.

The lawyers said this while briefing journalists on Tuesday in Abuja while the emir was being moved from Loko Development Area of Nasarawa State to Awe Local Government Area.

This comes barely 24 hours after the Kano State Government removed Sanusi as Emir of Kano.

The Secretary to the State Government, Usman Alhaji, made the announcement during the State Executive Council meeting which held at the Government House in Kano.

Alhaji explained that the state government took the decision to remove the traditional ruler over allegations of consistently refusing to abide by instructions given to him.

According to him, the removal was in line with the recommendation of the Kano State Public Complaint and Anti-Corruption Commission which had summoned the emir.

The commission had asked the traditional ruler to respond to a petition accusing him of selling lands belonging to the Kano Emirate to the tune of N2 billion.

But in documents obtained by Channels Television and signed by the chairman of the commission, Sanusi was accused of obstructing the investigation of the commission by securing a restriction order from a court.