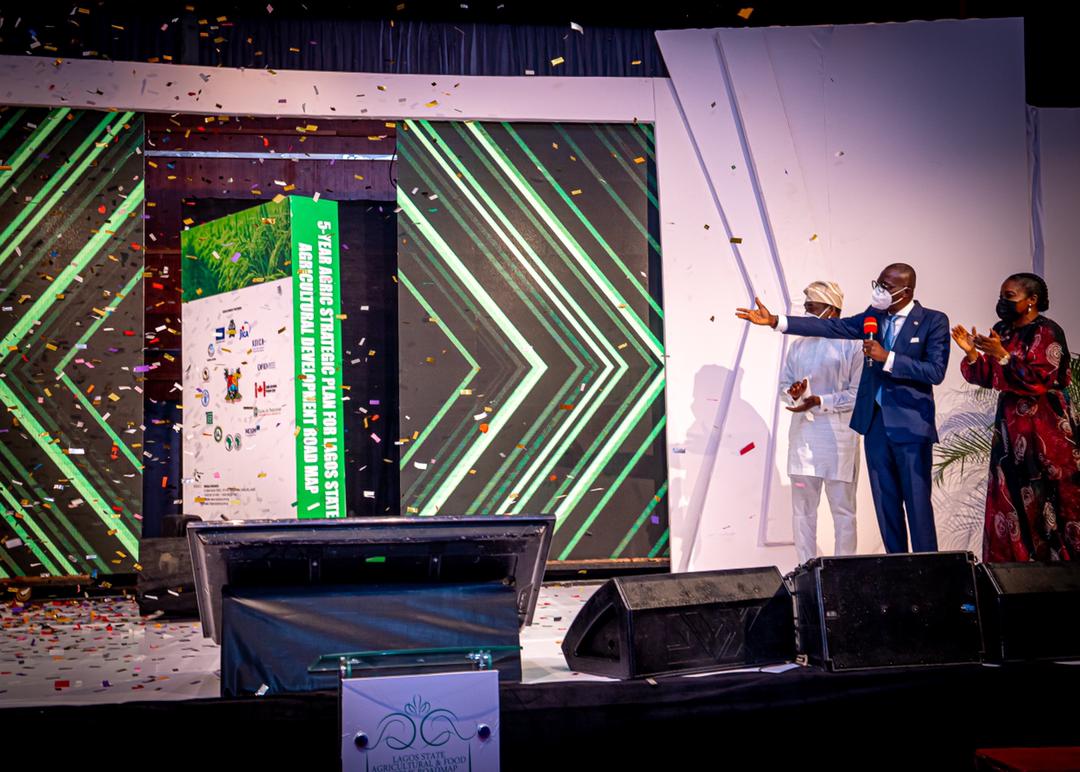 An audacious agricultural growth plan that will enhance food sufficiency in Lagos State has been unveiled by Governor Babajide Sanwo-Olu.

The five-year food security road map will see a  sustained public and private sectors’ investment in agricultural value chains to give Lagos comparative advantages in the sector and enhance the State’s self-sufficiency in food production from the current 18 per cent up to 40 per cent over the next 60 months.

Sanwo-Olu on Thursday at a ceremony organised by the Ministry of Agriculture at the Intercontinental Hotels, Victoria Island, rolled out the agric road map which will be achieved through a three-pronged approach.
The adverse impact of Coronavirus (COVID-19) pandemic on food security in Lagos, the Governor said, necessitated an immediate action towards ensuring food security for residents of the State.

Lagos, the smallest State in Nigeria in terms of land size, relies on massive food importation and mutual collaboration on production with other States to ensure food sustenance for its 22 million population.
Sanwo-Olu said the State could no longer rely exclusively on production alliances with other States, stressing that it was time for Lagos to unlock its agricultural potential by implementing the five-year road map.

The plan, he said, will set players in agricultural sector on the path of wealth generation and value creation, thereby improving food security and industrialization of agricultural sector, while also entrenching inclusive socio-economic growth.
He said: “At the inception of this administration, we identified food security as a major policy thrust and a key component of our T.H.E.M.E.S Agenda. The five-year Agricultural and Food Systems Road Map has been designed in line with our agenda to reform, transform and maximize the potential of Lagos’ agricultural sector.

“The focus of the road map is the development of agricultural value chains where Lagos has competitive and comparative advantages to enhance self-sufficiency in food production from 18 per cent to 40 per cent over the next five years, and achieve the Sustainable Development Goals (SDGs).

“To successfully implement the road map, we will take a cue from other economies that have achieved self-sufficiency in food production. We will also aim to put the private sector at the heart of our vision for food security in Lagos State, with government as enabler and catalyst.”
The strategies to achieve the plan, Sanwo-Olu said, will focus on leveraging technology to grow agric’s upstream sector through interventions capable of lowering the cost of production in identified value chains, including fisheries, poultry, piggery, rice, vegetables and coconut.

The Governor said there would be deliberate actions to grow the mid-stream and downstream sectors to enhance value chain in processing, handling, storage, cold chain, packaging, utilization and commercialization.
He said the State Government would link willing private sector players to business-friendly credit facilities and give incentives to improve private participation, while also formulating enabling policies to encourage return on investment.

Sanwo-Olu said: “The projection is that the total investment in the agricultural sector from the Government, private sector, donor agencies and development partners will run into over $10 billion in the next five years. While we expect most of the investment to be private sector-driven, government will continue to provide the needed infrastructure while the private sector will be encouraged to lead the key projects.

“We are revamping the Agricultural Land Holding Authority (ALHA) to drive investment into agriculture. We will strengthen the coconut belt with increased private sector involvement. The next five years will be productive, competitive and transformation as Lagos implements this road map, which will make the State to become the nation’s agricultural powerhouse. I invite you to join us to make history.”

Sanwo-Olu disclosed that Lagos had entered into a partnership agreement with two key States in the North Central for land availability, urging States in the Southwest to key into the objectives due to their proximity.
Commissioner for Agriculture, Ms. Abisola Olusanya, said the development of the road map started with stakeholder’s engagements and workshops around addressing the needs of the agric ecosystem in the State, pointing out that the blueprint provided a market-centric context pertaining to each value chain in Lagos food ecosystem.

She said: “There is a great wealth to be mined from the oldest profession on earth (agriculture) if data-driven principles are applied and the right information is made available to the investors.
“I dream of a Lagos where wholesome food is available, where healthy people thrive, where re-organised food system reduces freight congestion, post-harvest losses and increases profits for value chain actors. A Lagos where agriculture will empower millions of people and drive up productivity.”

Chairman of Chapel Hill Denham Group, Mr. Wale Edun, who analysed the agricultural road map, described the initiative as “laudable”, saying the State Government deserved to be supported on the vision.
He said the rollout of the initiative was timely, given the festering insecurity in the some part of the country, which, he said, posed great risk to Lagos food market because of the attendant disruption in the supply chain.

Edun, a former Commissioner for Finance in Lagos, however, urged the Government to limit the scope of its investment to infrastructure and environment. Private sector, he said, must be allowed to play a frontline role in implementation of the road map.
Commissioner for Finance, Dr. Rabiu Olowo, said the programme would increase the contribution of agriculture to Lagos GDP from two to five per cent, adding the roadmap would close the gap of wealth inequality.