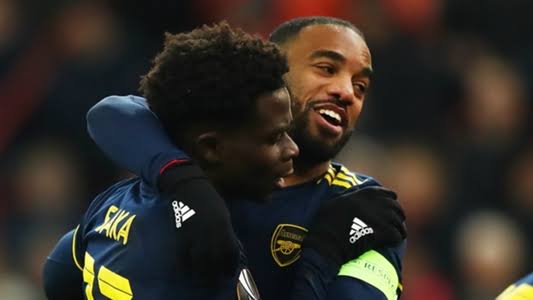 Bukayo Saka was the star of the show when Arsenal kicked off their Europa League campaign two months ago, and on Thursday the prodigious young talent was on hand again to ensure the Gunners scraped through as group winners.
Saka scored one and set up the other to rescue a 2-2 draw at Standard Liege, a result that was enough to see Arsenal top Group F and one that means they will avoid playing one of the stronger teams who have dropped into the competition from the Champions League, such as Inter or Ajax, when the last-32 draw is made on Monday.
Ultimately it was the result they wanted, but this was the not the performance Freddie Ljungberg would have been hoping for following on from the confidence boosting win at West Ham earlier in the week.

For 70 minutes in Belgium, Arsenal were woeful. They trailed 2-0 – with the hosts scoring through Samuel Bastien and Selim Amallah – and there were even concerns they might crash out of the competition altogether.
Eintracht Frankfurt were beating Vitoria 2-1 in the other game in the group, with Liege knowing that three more goals would see them leap above Arsenal into the runners-up spot.
But Saka, just as he did against Frankfurt in the opening round of fixtures, suddenly sprung into life and made the difference.
First, the 18-year-old swung in a wonderful cross which was headed home by Alexandre Lacazette to reduce the deficit before he combined expertly with Gabriel Martinelli on the edge of the box to find space and curl in the equaliser himself.
It was a three-minute cameo which turned the game on its head, and thanks to a remarkable late turnaround in Germany, which saw Vitoria strike twice late on to beat Frankfurt 3-2, it was enough to send Arsenal through as group winners.

“Bukayo had a tremendous night,” said Ljungberg after the game. “He was amazing and is a tremendous talent. His final ball and last bit is always effective.”
Saka was one of five young English players handed a start by Ljungberg in Liege, with Joe Willock, Emile Smith Rowe and Reiss Nelson also brought into the team with Ainsley Maitland-Niles, who started the win at West Ham on Monday night.
Konstantinos Mavropanos was handed his first start of the season, with the young Greek defender playing in a back three alongside Sokratis and David Luiz.
With so many changes, it was perhaps no surprise to see Arsenal put in a disjointed performance, with Mavropanos – who had played just 149 minutes of senior football since May 2018 – really struggling at times at the back.
Defensively the visitors were a mess, and when Liege struck twice before the midway point of the second half, the home crowd started to sense a dramatic night could be on the cards.
But then Saka come to the fore. His cross for Lacazette was perfect and his finish for the equaliser belied his tender years and experience.
The teenager has now scored twice this season. He also has six assists in all competitions, two more than any other Arsenal player.
He may have gone off the boil somewhat since his brilliant display at Frankfurt two months ago but in Belgium he reminded everyone just how exciting a prospect he is.
Arsenal now turn their attention to Manchester City on Sunday. The fightback on Thursday at least maintained some of the momentum they had built up from the win against West Ham, but Ljungberg will know his side will need to improve massively if they are to trouble the Premier League champions.