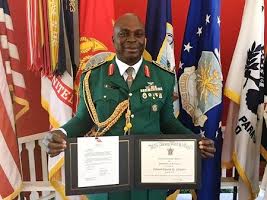 Brigadier General CHARLES Nengite is renowned for his brilliance, one of the finest of them all, but he is presently cooling his heels in detention.To those who knew him  he was a very brilliant officer who was the best overall at the Army War College, USA three years ago.

Between 2016 and 2019 he was seconded to the NDDC, Nigeria’s cesspool of corruption.According to reports, he allegedly benefitted from billions of Naira in contracts while there. Nsima Ekere the Niger Delta Minister as well as Nelson Brambaifa the NDDC boss ensured that he had more than enough.

At the end of it all, he had accumulated so much that 11.million Dollars was discovered in his wife’s US account.American authorities wondered how she could amass such wealth, invited her for questioning but there was nothing to explain the millions of dollars in her account and they got across to their Nigerian counterparts who invited Charles Nengite. We gathered that the officer is presently cooling his heels with security operatives while the EFCC has been drafted in to investigate the money laundering case as part of the general probe of the NDDC.

This General is one of the best brains you can think of. Given opportunity to push for improvement in his region Niger Delta, the man got to NDDC & has alliance with politicians from the region to SHARE the money & point them to Abuja as their problem!