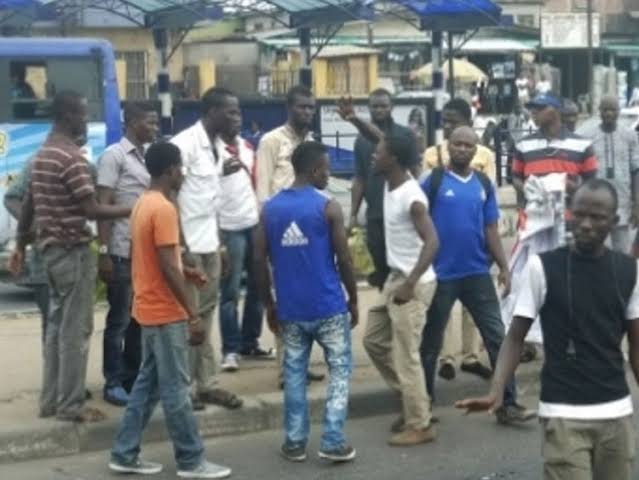 There was pandemonium in Lagos on Monday as motorcycle and tricycle riders protested against the ban on their operations in 15 council areas by the state government.

Our correspondents gathered that the protests held in Ijora, Apapa, Ikeja, Maryland, Lagos Mainland, Yaba and Oyingbo areas of the metropolis.

While the protest in Ijora turned violent with the police shooting to disperse the rioters, the demonstrators in other parts of Lagos were reportedly peaceful.

PUNCH Metro learnt that a riot broke out in Ijora when men of the Ijora-Badia Police Division prevented the motorcyclists and tricycle riders from holding their demonstration.

The riders were said to have burned tyres at the 7up bus stop.

In a bid to restore normalcy, the police reportedly fired teargas canisters to disperse the protesters, which led to an exchange of gunfire.

Footage of the clash, which was recorded by an eyewitness, showed the police giving some of the protesters a chase.

Also, three tyres were seen burning as vehicles tried to avoid them amidst the tension.

When PUNCH Metro visited the scene, an eyewitness, who identified himself simply as Ope, said two policemen and three protesters sustained bullet wounds during the clash, adding that the police arrested innocent residents, who were not involved in the protest.

He said, “When the motorcycle and tricycle operators were protesting under the 7up Bridge, policemen from the Ijora-Badia Division fired teargas in the crowd. The protesters retreated to mobilise. They started burning tyres at the junction, thereby preventing vehicular movement.

“Some hoodlums joined them and when the police opened fire, they retaliated. Three people were hit by stray bullets, while two policemen also sustained bullet wounds. The police had to call the Area ‘B’ for reinforcement and when they got to the area, they started arresting people indiscriminately.”

A tricycle operator, Isiaka Atanda, who said the people were only exercising their fundamental human rights, said the police were not supposed to use firearms to disperse the protesters.

Atanda said, “The government should consider us; there is no job; a lot of us, who are commercial tricycle operators, are graduates. The government does not want people to steal or commit fraud, but are they now trying to force people into illegal deals? This job is what we are using to manage, but they are disturbing us.

“ A stray bullet hits someone at the Saka Alawo junction. Also, a pupil was hit by a stray bullet; two of our members sustained bullet wounds.”

The state Police Public Relations Officer, Bala Elkana, who stated that no life was lost during the protest, said 20 suspects were arrested.

Elkana said, “On Monday, February 3, 2020, around 7.45am, the police received a distress call that some hoodlums in large numbers and armed with cutlasses, suspected to be okada riders and thugs, blocked some major roads around Ijora-Oloye, Amusu, Ijora-7up, Ijora under the bridge, Sifa junction and Gaskiya Gangare area, all within the Ijora-Badia Division.

“The hoodlums caused major obstruction on the roads, burning tyres, looting and stealing from unsuspecting road users. Police officers from the Ijora Badia Division, Area ‘B’ Command and the Special Strike Force on Social Miscreants were promptly deployed in the scenes. The situation was brought under control. The obstruction was cleared for a free flow of traffic. No life was lost. No fewer than 20 suspects were arrested. They will be charged.”

Meanwhile, some motorcycle and tricycle riders protested at the Allen roundabout, Ikeja, Maryland, Lagos Mainland, Yaba and Oyingbo areas of the state.

Some tricycle operators also urged the state government to reverse the ban, noting that their means of survival had been taken away.