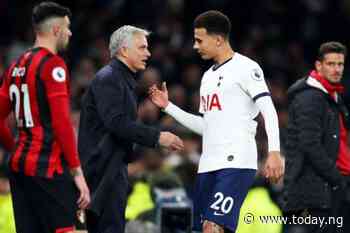 Jose Mourinho says Tottenham supporters do not love him yet, but he hopes a run of three successive wins to open his reign in north London has him heading in the right direction.
Spurs turned to the Portuguese after taking the decision to move on from Mauricio Pochettino after five-and-a-half years.
Mourinho’s glittering CV attracted him to Tottenham, with a side longing for tangible success turning to a proven winner for inspiration.

An immediate impact has been made by the new boss, with six points claimed from two Premier League games and a come-from-behind success enjoyed over Olympiacos in the Champions League.
Spurs’ latest triumph saw them survive a fightback from Bournemouth to prevail 3-2 on home soil, with Mourinho stating afterwards that he hopes to earn the affection of the club’s loyal fan base.
He told BBC Sport: “The fans love the club, I’m not saying they love me but they accept me as a top professional who wants to give everything for the club.
“People have more reasons to love me if they like my work, but the fans are behind the team and the see us working hard to get to a position in the table that is more suitable to the talent of this squad.”
Spurs, who slumped to 14th under Pochettino, have clambered back into fifth spot in the Premier League table.

A return to form for Dele Alli has helped to make them upwardly mobile once more, with the England international bagging a brace against Bournemouth.
Mourinho added on a player who had looked a little out of sorts prior to his arrival: “He plays in a position where he feels happy and comfortable, we also give him space for his creativity which he always has.
“I think he played three phenomenal matches since I arrived.”
While Mourinho has Tottenham ticking over as an attacking force, he is still waiting on a first clean sheet.
The hope is that defensive solidity will return in time, with Spurs very much a work in progress under a different set of eyes.
Mourinho added on the display of his side against Bournemouth: “I think it was in our best period when we scored the third goal, we were close to score the fourth and then when they scored the first one it was a different game.
“I felt the boys felt a bit tired after playing a high intensity game, but we had the chance to score the fourth goals, but then in the Premier League the game is always alive.
“We played well for long period of the games, we had a few scary moments but I think the fans enjoyed. We scored seven goals in four days.”
Spurs will be back in action on Wednesday when Mourinho takes his new side to Old Trafford for a reunion with former employers Manchester United.