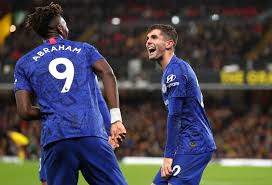 Abraham’s 10th league goal of the season unlocked the Palace defence after 52 minutes of resistance, before Pulisic sealed a sixth consecutive league victory for Frank Lampard’s side with his fifth goal in three league games.

Chelsea last won six Premier League games in a row in their title-winning 2016/17 campaign, and this latest victory will only fuel talk of them mounting a challenge for the title again this season.

Palace could have climbed up to fifth with a win, but they slipped to 10th after suffering a third defeat in four.

How Chelsea climbed up to third
Chelsea were made to work for their victory, with former Blues defender Gary Cahill marshalling a Palace back four that prevented the hosts from scoring in the first half for the first time in three matches.

But it was not for the want of trying. Pulisic nearly got Chelsea off to the perfect start on 12 minutes when he jinked his way into the area, but a smothering save from Vicente Guaita rescued Palace before Willian whistled a free-kick inches wide.

Palace bedded themselves in after the early onslaught, but Chelsea laid siege on their goal before the break. Guaita was called into action to prevent Willian’s dipping volley from finding the net before Pulisic sent a header over the bar.

A stunning reflex save from Guaita and a last-gasp Cahill block saw Palace reach the interval unscathed, but only just after Willian had two bites at scoring the opener deep into stoppage-time.

And, within seven minutes of the restart, Chelsea finally made their pressure tell. Mateo Kovacic played the ball up to Willian at the end of a driving run, and the Brazilian’s improvised flick released Abraham who clinically fired past Guaita.

Pulisic was denied a quickfire second when his rasping drive drew a fingertip save from Guaita on the hour. And Palace should have drawn level on 70 minutes, but James Tomkins headed their best chance wide when Luka Milivojevic’s cross found him unmarked in the Chelsea box.

But Chelsea heeded their warning, wrestling back the initiative and laying the foundations for Pulisic to settle the contest, as he nodded substitute Michy Batshuayi’s blocked shot home to maintain his, and his team’s, fine recent form.

Stats: Chelsea – champions?
Chelsea have won six consecutive Premier League games for the first time since May 2017 under Antonio Conte, in their last title-winning season.

With an average age of 24 years and 88 days, Chelsea named their youngest ever starting XI in the Premier League, and the youngest of any team in the competition this season.

Man of the match – Christian Pulisic
The American had a difficult start to life at Chelsea but that’s firmly behind him now. His goal made it five from his last three Premier League games and he was unfortunate not to score in the first half too. Frank Lampard described him as a “big player” afterwards. His importance to the side is growing by the week.

What the managers said
Chelsea’s Frank Lampard: “Every game in the Premier League hard, particularly against a team as organised as Palace are. When we came out for the second half with the intent that we did and the extra 10 per cent of urgency in our game, we won the game relatively comfortably. It probably could have been more with a little bit more end product but it was a nice, solid win with a clean sheet.”

Crystal Palace’s Roy Hodgson: “After a Champions League game, you hope your opponent might be jaded or not playing to their full potential but that certainly wasn’t the case. I thought we weathered the early storm well. I thought the shape of the team and the way the players worked hard to control an opponent who was in very good form was good. I have no criticism of them at all.”