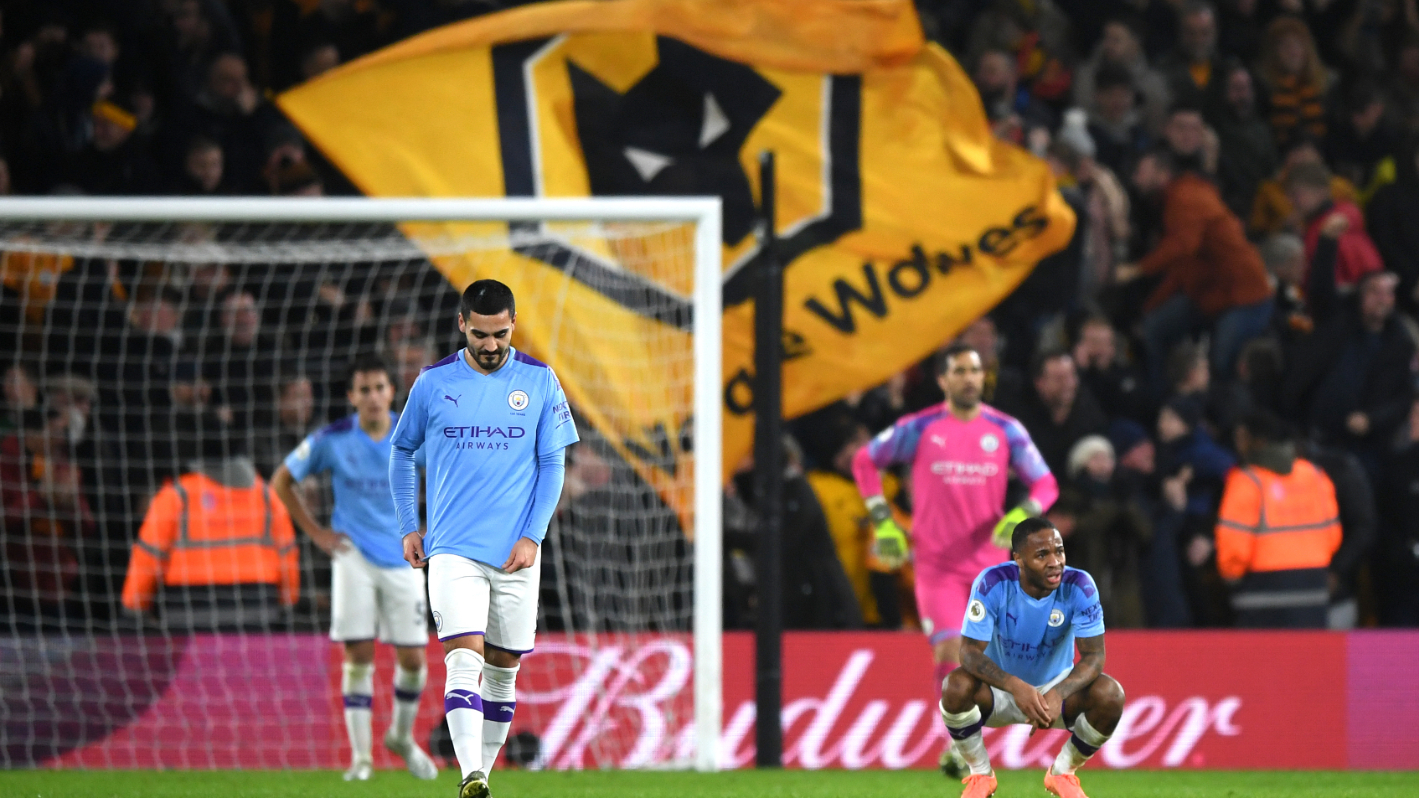 Having let a two-goal lead slip away at Wolves, City now sit 14 points behind Liverpool having played one game more and face another match in two days

Manchester City ran out of legs at Wolves, their title defence now surely over, and Pep Guardiola has no choice but to look to Europe.
A ridiculous fixture schedule – two matches in 48 hours – meant there was already faint hope of City cutting Liverpool’s lead at the top of the table over Christmas.
It became even slimmer when they had to play 90 minutes with only 10 men on a Friday night at a frantic and fraught Molineux. A game they had to survive was just too much.

True, Ederson had only himself to blame for a red card in the 11th minute when his misjudgement led to him rashly taking out Diogo Jota as he raced through on goal.
But City wilted as Wolves sealed a remarkable comeback with Matt Doherty’s last-gasp winner.
Jurgen Klopp’s said pre-Christmas that City’s fixture schedule was a “crime” and the champions are now 14 points behind, having played a game more.
England’s notorious festive schedule is tough on all players and it was clear in City’s performance at Wolves.
Kevin De Bruyne ran himself into the ground with a brilliant performance against Leicester on Saturday evening when he had to leave the pitch with cramps.
At Molineux, the Premier League’s most in-form player struggled to have the same impact and was taken off midway through the second half, although he still managed a brilliant assist for Raheem Sterling’s second.
By then they were already ahead through Sterling’s controversial and messy 25th-minute opener. VAR took seven minutes to award a penalty for Leander Dendoncker’s foul on Riyad Mahrez.
Rui Patricio saved Sterling’s first penalty, and his second too after VAR awarded a retake, but the England international finally turned in the rebound.
That perceived injustice fired up a furious Molineux and turned the game into a battle of survival rather than the usual free-flowing football. City couldn’t manage it.
Adama Traore’s incessant running proved too much. He smashed in a brilliant 20-yard strike before punishing Benjamin Mendy’s dawdling to set up Raul Jimenez’s equaliser.

By then City were tiring badly. De Bruyne was not the only one to look fatigued. Mendy looked visibly shattered against the pace and threat of Traore, Fernandinho and Nicolas Otamendi were unusually deep in their own half, while Bernardo Silva and Sterling toiled to give some threat on the break.
Guardiola will already be thinking about his preparations for Sheffield United as he sits on the coach heading for a rendezvous back in Manchester way past midnight.
One of the most important thoughts going through his mind will be how to protect his players through such a punishing schedule.
He does have options. Phil Foden, Ilkay Gundogan, Oleksandr Zinchenko and Joao Cancelo can come into his XI without too much quality being lost while John Stones and David Silva are nearing a return from injury.
But who could blame Guardiola if he decided to look after his players and look to continental prizes instead? The Champions League is emerging as City’s best chance of a major trophy and is the biggest prize sought by owner Sheikh Mansour.

Klopp described his side’s three days of preparation for their game on Sunday as “like a holiday”. Liverpool’s next opponents are Wolves and they will have had even less rest than City by the time they kick off on Sunday afternoon.
It was hardly the closest of battles with leaders Liverpool 14 points clear at the top of the table, having played a game fewer. It looks all over now barring an almighty collapse. Given the Reds have shed only two points all season long, that seems remote.
City, after Ederson’s red card and a palpable lack of energy late on, looked a spent force in this game by the time Doherty rammed the winner past Claudio Bravo. They look a spent force in the title race too.