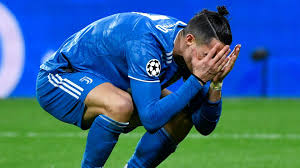 Juventus found themselves on the wrong end of arguably the biggest upset so far in the Champions League last 16, but it is the manner of defeat that will perhaps give Cristiano Ronaldo, Maurizio Sarri and Co. most pause for thought.

Despite fielding the likes of Ronaldo, Paulo Dybala and Gonzalo Higuain on Wednesday against Lyon, Sarri’s men looked toothless in attack as they went down to a 1-0 defeat.

The Bianconeri dominated possession but were woefully short of precision in the final third, failing to register a single shot on target over the course of the 90 minutes.

Lyon struck after 31 minutes through midfielder Lucas Tousart and held on to secure a win that will heighten hopes of a giant-killing once the second leg gets going in Turin.

And while the result is displeasing enough for the Serie A champions, the statistics behind their first-leg reverse make for even grimmer reading.

Indeed, not since November 2009 had the Biaconeri lost against French opposition in the Champions League, with the last such setback coming in a 2-0 defeat against Bordeaux in the group stages.

It is also the first time the French outfit have come out on the winning side in a Champions League knock-out tie since February 2012, when they prevailed 1-0 over APOEL Nicosia.

Juve are usually a potent attacking threat in European competition, but on Wednesday they failed to test the opposition goalkeeper for the first time in over five years.

Not since October 2014, against Diego Simeone’s notoriously mean Atletico Madrid, had the club gone an entire Champions League game without a shot on target.

And while those attacking weaknesses will be of concern, all is not rosy at the back, either.

Juventus have conceded in seven consecutive away games in all competitions, their longest such run without a clean sheet in a single season since May 2010, when they were scored upon for 18 straight matches.

Sarri’s men will have the chance to put the record straight in the second leg on March 17 when Lyon visit Turin.

For now, their attentions return to Serie A, where they currently sit just one point clear of Lazio at the top of the summit.

This Sunday sees Inter, who lie five points behind with a game in hand after their weekend fixtures was cancelled due to the coronavirus outbreak, travel to the Allianz Stadium for the Derby Della Madonnina, while Lazio take on Bologna on Saturday and have the chance to go top for at least 24 hours.