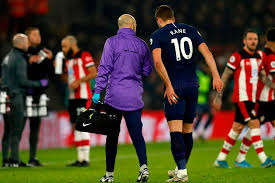 Tottenham have confirmed that Harry Kane suffered a tear to his left hamstring on New Year’s Day.

Kane was forced off during Spurs’ 1-0 defeat at Southampton on Wednesday, and will play no part in an FA Cup third-round clash with Middlesbrough this weekend.

The England international could now be out of action for a lengthy period, with the severity of his injury revealed on Friday afternoon via Tottenham’s official website.

Jose Mourinho admitted to fearing the worst regarding Kane’s fitness at a press conference earlier today, and the club have now stated that they will “continue to review the injury with treatment ongoing.”

Kane issued a message to supporters on social media, which included an image of him clutching his hamstring, with the caption: “Head up. Tough times don’t last, tough people do.”

The 26-year-old has been a standout performer for the Lilywhites once again this season, scoring 17 goals in 25 appearances across all competitions.

Tottenham are sixth in the Premier League table at the moment, six points behind fourth-placed Chelsea in the race for a Champions League spot.

After their meeting with Boro, Spurs will switch their attention to a huge home clash against league leaders Liverpool.

Mourinho still has Lucas Moura and Dele Alii to call upon in the attack, with Son Heung-min due to return on Sunday following a three-match suspension.

When quizzed on Kane’s absence, the Portuguese head coach told reporters: “I want to focus now on the players that are available.

“About Sonny, I just cried once, for the three matches he was not playing I avoided speaking about Son. Now Son is back I prefer to speak about Son than Harry.”

17-year-old forward Troy Parrott is another option for Mourinho, but he feels the teenager still “needs time” before he can be considered as a “direct replacement” for Kane.

Tottenham will wrap up their January schedule with fixtures against Watford and Norwich, before playing host to reigning Premier League champions Manchester City on February 2.