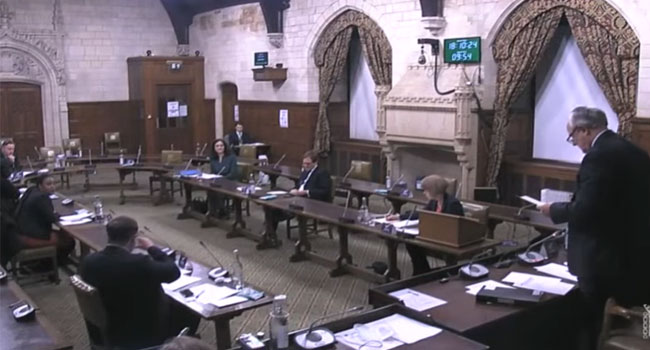 The Buhari Media Organization has noted in their response to the UK parliament that the recent session held by members of the UK Parliament’s Petition Committee to debate the EndSARS protests and also propose sanctions against Nigeria was a Kangaroo Court that spit in the face of democratic values.

The group in a statement signed by its Chairman, Niyi Akinsiju, and its Secretary Cassidy Madueke, also strongly condemned the ongoing campaign of calumny by some international interests against Nigeria, noting that these persons and their platforms, including the angry UK Parliamentarians, were employing untruths to push their agenda.

“The debate, which was attended by about 10 parliamentarians was a mash of fact-less comments, unsubstantiated accusations against the Nigerian Government, attacks on the sovereignty of our country, and worse, a web of contradictory bombasts from publicity-hugging Parliamentarians seeking to justify their cravings for sanctions with unverifiable claims.”

The group stated that no amount of fake news, untruths, conjectures, and falsehood will revise the events that took place at Lekki Toll Gate to suit the anti-Buhari government narrative favoured by the mob.

“Raw emotions clearly overshadowed Parliamentary decorum at the UK session. Assuming for one moment the intentions were noble, the outcome was a Westminster parody featuring a misguided band of MPs who wasted considerable time at the public’s expense, peddling and regurgitating barefaced fake news they picked up from fringe social media sites, the type the UK Government would easily discountenance.

“The Army has stated categorically that they employed only the use of blank ammunition to disperse unlawful protesters who had become a threat to the peace of Lagos State, and this is proven by the very fact that even while there were injuries, mostly due to the stampede of their dispersal, there is no case of a fatality; till date, 25 days after, no family or relative or associate has come forward with proof that they lost anyone at the Lekki Toll Gate. Because there is none. And this is a matter of fact.

“However, we have observed how some international interests, including the CNN and those British misinformed parliamentarians, have had sleepless nights attempting to forge and revise the events of the night of 20th October, to force down the throats of their viewers the mischievous lie that deaths occurred.

“The ignorant UK Parliamentarians even claimed that the Army admitted to shooting live rounds, a fictional claim that the Nigerian Army never made.

“One of the Parliamentarians, relying on what she called the testimony of an eye-witness claimed that 56 people were killed, including about 10 protesters. This is simply laughable and insulting to their audience. Where are those 10 people she spoke about? And where are the remaining 46? These are serious allegations that we do not take lightly. An institution of the UK Government should not be seen entertaining such beer-parlour commentaries, and further seeking to act on them.

BMO stated that the United Kingdom embarrassed itself by allowing such a debate to hold.

“It is most unfortunate, and highly embarrassing that the UK parliament will allow itself to be brought to such a disgraceful low by entertaining this session of falsehood.

“Perhaps, its only saving grace, and one that we are thankful for, is the response of the Minister for Africa who made firm the position of the UK Government and its relationship with Nigeria, carefully and intelligently refusing to be dragged into the session of confusion and fake news, and insisting on following official channels to engage on this matter, while monitoring closely the Judicial Panel of Inquiry set up in Lagos State. This is respect for Nigeria and its institutions, and we are encouraged by this.

“Regardless, we insist on making this position firm and clear: no amount of fake news and disingenuous moves by international actors would bring Nigeria to its knees. Our people are resilient, unmoved by the agitated ignorance of a few who think they are wise, and dedicated to the unity, the dignity and integrity of the nation.”