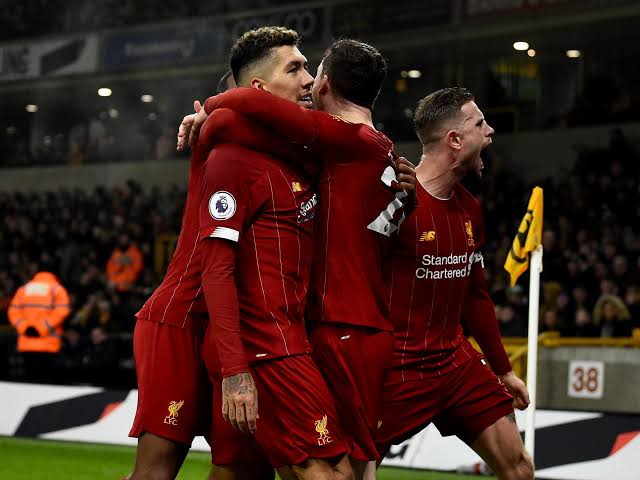 Well, what is there left to say about this Liverpool team?
Just when you thought that the party had to end, Jurgen Klopp’s side find a way to turn the music back up. Just when you thought they were out, they pull themselves back in.
How do they do it? How do they keep digging out these wins when everything tells you that this, finally, is the night when their luck runs out?

Their 14th successive league victory was by far their most hard-fought. Having lost Sadio Mane to a first-half injury, they threatened to go under at Molineux when Raul Jimenez pulled Wolves level six minutes after the break. The home side, roared on by one of the noisiest crowds in the country, smelled blood.
Liverpool wobbled. They made errors. They lost their way in possession. Alisson Becker made saves, Joe Gomez and Virgil van Dijk made crucial interventions. Wolves pushed, pushed, pushed.

And then, with six minutes left, Roberto Firmino drew back his left foot.
Goal. Bedlam.
Firmino is very much Liverpool’s away-day specialist this season. All of his goals have come away from Anfield. This, his 10th of the campaign, was as precious as any. No surrender. Not just yet.

The 16-point lead at the top of the table is restored, and can be extended at West Ham on Wednesday as the Reds play their game in hand. By the time Manchester City next play in the league, the gap could be 22 points. Honestly.
If January was to be month to test Liverpool, to stretch them, well they have risen to the challenge. This was their fifth win of the month, each of them vital, each of them requiring every ounce of courage, spirit and togetherness. They rarely do it the easy way, ths team.

In the Molineux mist, captain Jordan Henderson had headed them into an eighth-minute lead, converting another pinpoint Trent Alexander-Arnold delivery from the right. Liverpool’s right-back remains their most potent creative force; since the the start of last season, the 21-year-old has provided 22 Premier League assists, more than any other player. Whether from open play or, as here, from a dead ball, he is deadly. Just as against Manchester United on Sunday, his set-piece opened the game up.

The shine was taken off the first half, though, by the sight of Mane pulling up 12 minutes before the interval. The Senegal star headed straight for the tunnel, replaced by Takumi Minamino for a Premier League debut. “A muscle tweak,” said Klopp afterwards. Liverpool will hope the prognosis is a generous one. As good as they are, they do not want to be without Mane for too long, especially with the Champions League last 16 looming on the horizon.

That is a worry for another day, mind. Liverpool had looked a little sorry for themselves as Wolves rallied. They were penned back by the sheer force of Adama Traore and his non-stop running. Traore crossed for the equaliser, headed in by Jimenez. It was the first goal Liverpool had conceded in the league for 726 minutes.

At that point, it was anyone’s game. Traore shot and Alisson saved, Gomez blocked from Pedro Neto. Andy Robertson was overrun, Mo Salah was refusing to pass and Fabinho was summoned from the bench. Firmino missed a golden opportunity.
A point would not be so bad, you thought. The lead is big enough, after all, and that game in hand provided the perfect safety net. You can’t win them all.

Firmino had other ideas. Collecting a pass from Henderson, after some mazy dribbling from Salah on the edge of the box, the Brazilian shifted onto his left foot and smashed past Rui Patricio.