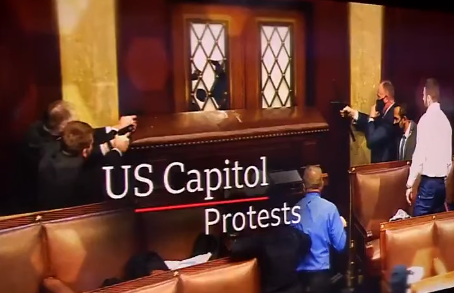 Chinua Achebe said “Those who have had their kernels cracked for them by benevolent spirits should in turn, learn to be humble”

Simply sum up #CapitolRiots this way: Do not mock a pain that you haven’t endured. Nigerians can relate very well, American leaders are now seeing why there is nothing like absolute right to protest.

So let’s have a few conversation around this. Yoruba adage says if a compound is calm, it may just be because the bastard among them is still a toddler. How did this #CapitolRiots start? That same Trumpet Trump started it by saying TAKE IT BACK, just like your slang in Nigeria when you are going for Revolution.

So here it is: It was simply a PEACEFUL PROTEST, a FUNDAMENTAL RIGHT of Americans as ENSHRINED in American Constitution. So why did @CNN & other media outfit change the name of protesters to DOMESTIC TERRORISTS? What’s the offence of Trump that they blocked him on Social Media?

1. “All Animals are equal but some are more equal than others”.…George Orwell

Let’s start from here. For America & Americans, ALL PROTEST in Africa is ACCEPTABLE & LEGITIMATE. For @CNN @Twitter @Facebook etc, once you see any PROTEST in Africa, it must never be stopped!

Just check the difference in approach. Jack the owner of twitter opened his platform for donation to support insurrection in Nigeria. @CNN made their platform available for ANYONE who could add petrol to fire in Nigeria during #EndSARS protest. You see, all animals are not equal after all.

To them, Africa is just a conquered territory since they have a lot of #SlavesByChoice individuals to use. During any protest in Africa, who are the ones they VERIFY and AMPLIFY their voices on their platforms across the globe? Those who can add more inciting statement that will burn down Africa. Who are the ones to interview? Those who can incite the people further like what happened during EndSARS protest in Nigeria.

Till date, @cnni will not call what happened in Lagos a TERRORIST ATTACK. Roads were blocked, Lagos-Ibadan express was blocked for days, Some of us couldn’t drop our children in their Schools. Police & Police Stations burnt because of #EndSARS. Define INSURRECTION again. (Read LAGOS TERRORIST ATTACK, THE MISSING CNN AND BBC DOCUMENTARY).

Listen, there’s nothing they did out of ordinary by entering the #CapitolBuilding on that day. People took #EndSARS protest to the Nigeria National Assembly, it was well accepted as their FUNDAMENTAL RIGHT by @CNN & the International media. Any difference? https://youtu.be/mUfvvvy5QjY

When the Military stopped #EndSARS protesters at the National Assembly in Abuja, it was called absurdity. When the National Guard was delayed at the #CapitolBuilding because Trump was not in his right mind, @CNN & Americans were calling that FAILURE of leadership. https://t.co/BfcFPahJwY?amp=1

Tell me what the Protesters at the #CapitolHill did that was not done 100 fold in Nigeria DEMOCRACY. People literally went to block Airport in Nigeria & was well supported by International Media from USA as a legit process. @CNN @StephanieBusari supported the insurrection.

2. National Security Supersede Human Right. Check it from the day of #CapitolRiots, argue all you like, one thing became very clear again, the West will never negotiate their National Security on the altar of Human right. Four people died but no CONDEMNATION from CNN & their local Media.

Your right to say what you like was SUSPENDED in America IMMEDIATELY. Donald Trump was BLOCKED from all Social Media from making any inciting statement further. Not a single media in the USA including @cnni dared promote or bring any ANALYSTS to make any INCITING statement in support of the protest. WHY???

Why did @Twitter restrict any account that could incite USA further, yet SUPPORTED everyone that incited terrorist attack that happened in Lagos last year October? Why is @CNN @BBCWorld & others only bringing those who condemned #CapitolRiots yet supported riot in Nigeria?

Did you notice that nobody was discussing the death of those 4 Americans who carried no gun during protest yet killed? Did anyone ask “Who gave the order” for the National Guard to be deployed even when it wasn’t Trump? Anyone discuss LIVE rounds used? NATIONAL SECURITY FIRST!

Why shouldn’t there be a worldwide condemnation that those involved in #CapitolRiots must not be arrested, intimidated or sacked by their employers? Didn’t confused souls like @aliciakeys @kerrywashington @StephanieBusari & the likes raised objection to such in Nigeria? MAD o!

3. Constituted Authority & Politics. Let me end my observation on this. The Governor of Lagos Nigeria declared a curfew at 11:49am AFTER #LagosRiot had gone violent & Police stations burnt, they said 4 hour wasn’t enough to MOVE an inch from protest ground. They obeyed USA curfew immediately anyway.

These children of destruction told the world it was their HUMAN RIGHT to disobey the law in Nigeria, @Twitter, @CNN@BBCAfrica amplified their lawlessness. The same couldn’t be seen when Curfew was declared due to #CapitolRiot & National guard was deployed. #SlavesByChoice

National Guard (American Military) was ACTIVATED to disperse just one day PEACEFUL PROTESTERS in DC, it was seen as legitimate in America. @HQNigerianArmy was ACTIVATED to stop those who insisted they wouldn’t obey curfew in Nigeria, the West, USA in particular said it was wrong!

And the most ridiculous part of this politics in the midst of chaos was seeing jokers like @abati1990 on @ARISEtv calling VP Mike Pence a hero for accepting the result that Trump wouldn’t accept. Wait, he should have declared Trump the winner of the election abi..Una no normal.

Show me one place in 4 years where Mike Pence stood in the way of Trump. When Trump was messing up everything about Covid & he was confronted with direct question, why didn’t he say Trump was wrong? What else to defend? You see, Politicians are the same EVERYWHERE: OPPORTUNISTS.

They lost out already, there’s nothing to lose. So everyone is using this two weeks before the new Government comes in to launder their images INCLUDING Mike Pence. He saw that Georgia’s Secretary of State has suddenly become the hero by standing up for the constitution and did same. He is POSITIONING himself as the next Republican candidate.

Human beings under the same circumstance are the same EVERYWHERE. At what point will you call it “PROTEST” & when will it become INSURRECTION? What has been happening in Nigeria is tagged PEACEFUL PROTESTS & this ordinary walk through #CapitolRiots is tagged local terrorism. HOW?