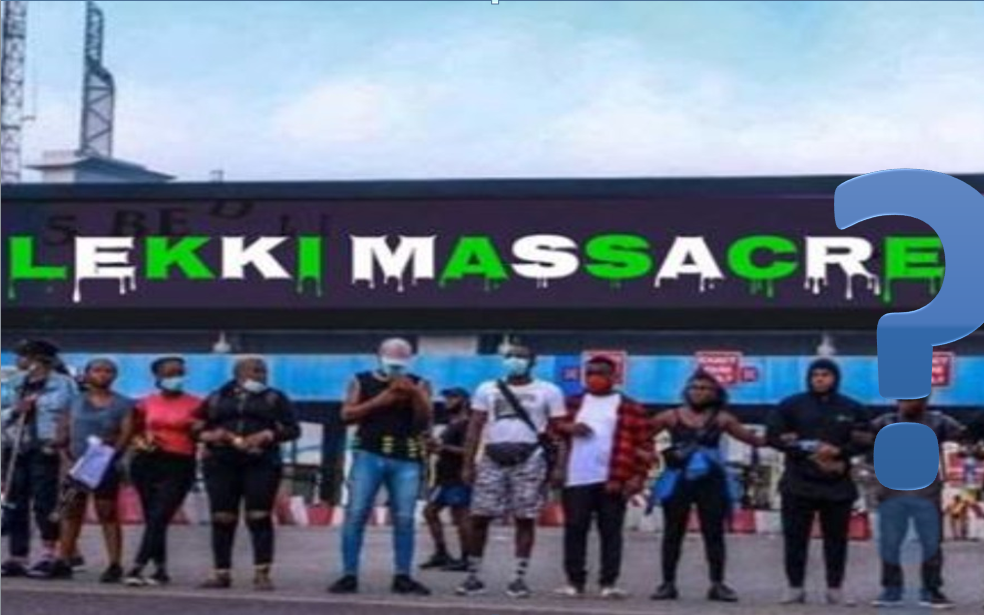 Fellow Nigerians and citizens of the world,
This #LekkiMassaccre conversation will not go away that soon. Emotional blackmail will not bury it, Propaganda from both Government or any CSO/NGO or @dj_switchaholic
will not let it go.

Please go watch the rest of this video on my Instagram page. Thank you ?? #EndPoliceBrutalityinNigeria #EndBadGovernanceinNIGERIA pic.twitter.com/CfZ7Mf4uk4

It’s a Chronicle of events that brought us here:
1. #EndSARS protest was a common ground that brought everyone across party lines together, Social structures were “erased”, religious differences were removed.
Some of us joined & we didn’t hide it. Inspector General of Police responded on the 11th of October 2020.

Now this is where we are. While we were still in the midst of #EndSARS the IGP came LIVE to announce that SARS formation has been dissolved.
At that point, it simply means the existence of a unit known as SARS is no more known to law in form or practice.#SARSMUSTEND is for what? pic.twitter.com/pYEFLyx9KL

On the 12th of October (Monday), @MBuhari came up to address us, if you were told that President Buhari didn’t say anything, it’s because you listen too much to funny analysts from @channelstv & other TV Stations like that. I deliberately brought this tweet of 12th October

Just now, after wasting the entire time more than 72 hours, our Bubu finally did his own broadcast today. As if this really matters to me again.

Having said that, this blockage of Lekki & #SARSMUSTEND protest, what is the focus? You are about to waste this early victory guys! pic.twitter.com/PaZxA8I4q4

On October 12th AFTER SARS had been disbanded & Mr President also had spoken about it, I began to warn everyone that “Once our common agenda is hijacked AFTER #EndSarsProtests, just know that it’s a wasted victory.”
At that moment, AGENDA had changed!

There are many “agenda” within this general agenda. Once our common agenda is hijacked AFTER #EndSarsProtests, just know that it’s a wasted victory.
Some will henceforth begin to have issue with fund accountability. Some will have issue with other things.#PoliceReform is the key

Somehow, we began to see donation from the International hands.
We began to see the change in hashtag from #EndSARS to #SARSMUSTEND then #BuhariMustResign.
People said they would go on with protest. Then blocking of Lekki Toll gate gained more ground.
NOTE: Other road users could not do their businesses, their rights were violated by fellow citizens. 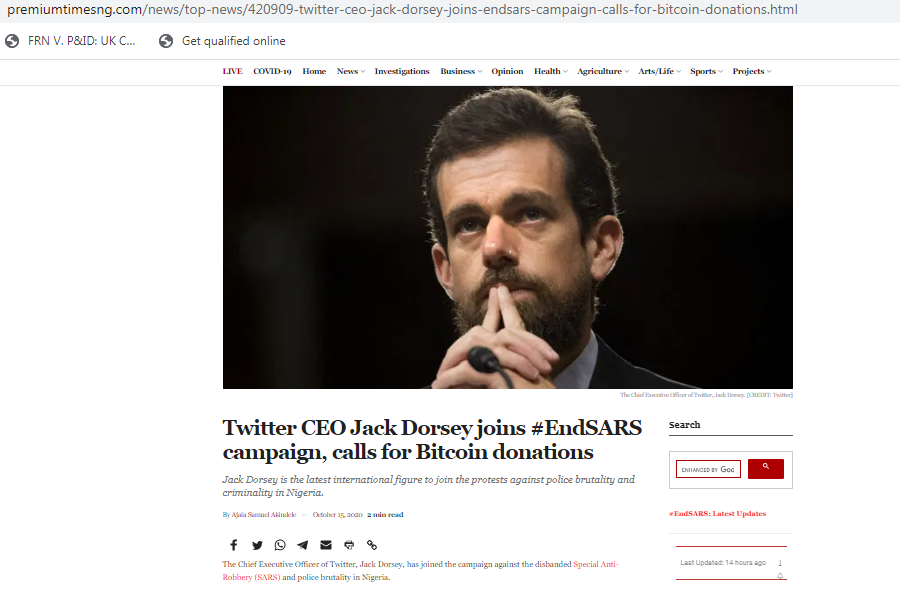 People insisted that it was a good idea to continue the protest that same week UNTIL all demands are met.
Lekki Toll Gate became popular more than Secretariat where Government could directly be met.
Transport workers, Agberos etc using those roads for legitimate business lost their right to use the roads

Street protest became more interesting because funds were distributed to sustain it and people had fun WHILE IT LASTED.
Don’t forget, this protest was taking off “hoodlums”, Agberos, transport workers etc that were using different roads for their own legit businesses.
Did you plan for them or you thought they would be idle for those weeks? 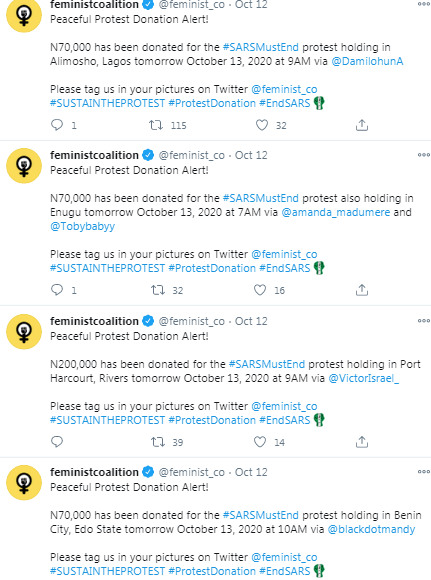 Then the demands were itemized called #5for5 as at 12th October 2020.
@jidesanwoolu was at the protest ground & he said “Tomorrow, I will be meeting with HE Pres. @MBuhari in Abuja.”
He took the demands to Abuja the following day.
You need to know how we got into #AvoidableCrisis 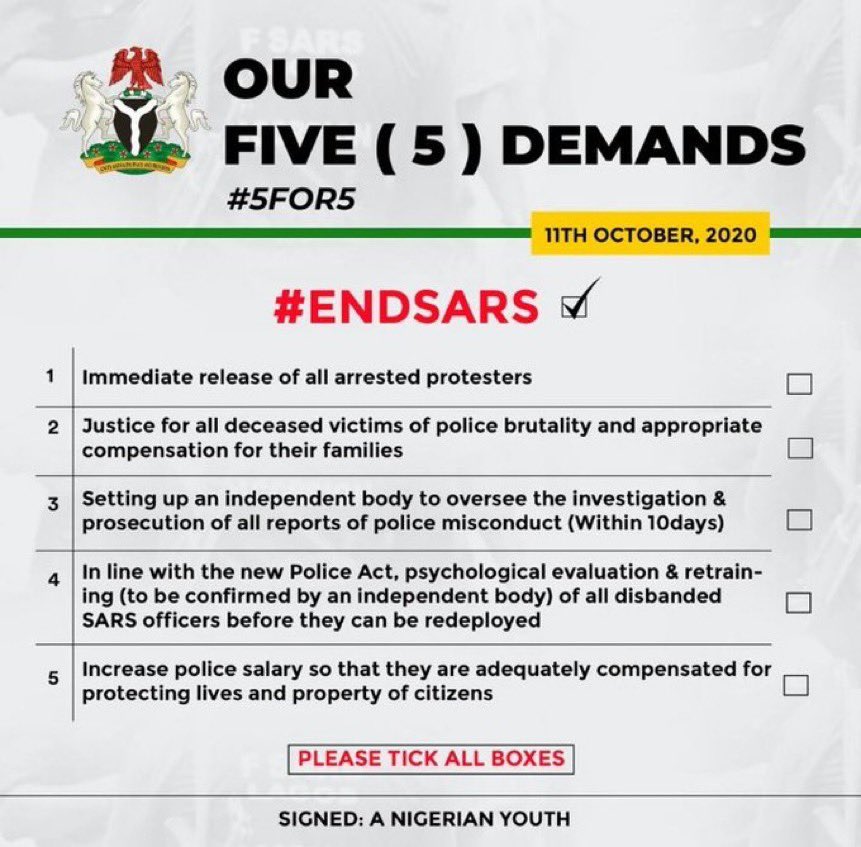 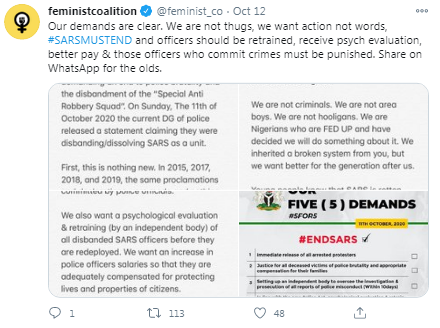 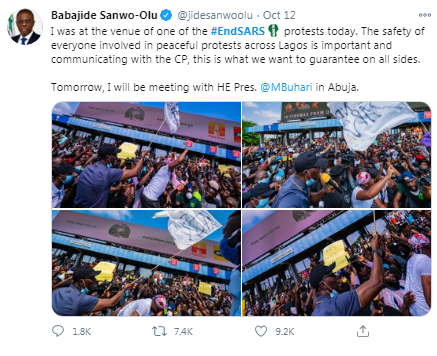 13th October 2020, @jidesanwoolu came from Abuja with this assurance that @MBuhari had approved the #5FOR5 demands especially where FG needs to come in while States set do their parts.
1. Arrested protesters were being released in each State✔️
2. Justice & compensation for victims of Police brutality…. 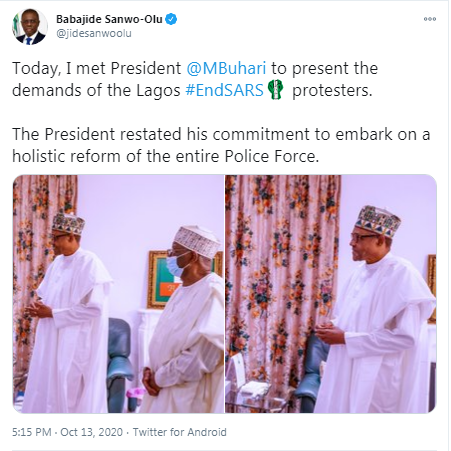 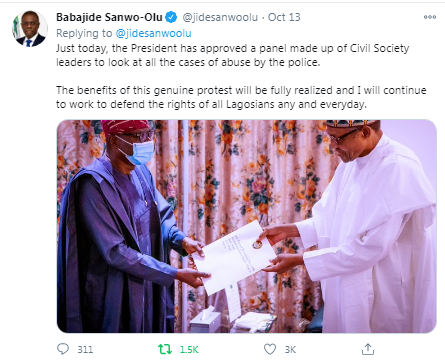 The steps to meet #5FOR5 were being taken & DOCUMENTED for us to see in each State but that of Lagos State was more obvious because it’s the hotspot. 13th, Trust fund was set up, N200M funds set aside.
Judicial panel set up. YOUTHS refused to bring their REPS.
That was 15th. What else did we want then? 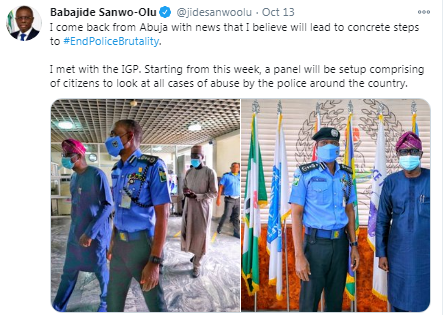 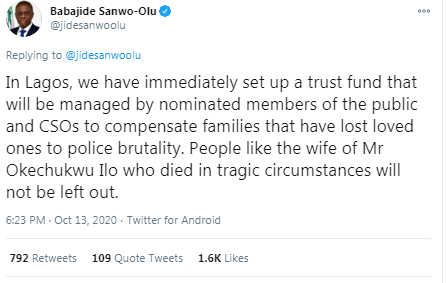 15th was Thursday, all the #5FOR5 that could be met in the immediate had been taken care of, Govt had given go ahead on a process that will obviously take some time and the National Assembly had also come in.
IGP and the Minister of Youth and Sport @SundayDareSD called a meeting to dialogue further, “GenerationZ” said “we have no leader”. Falz said they would not attend. Well, some of us attended the Zoom meeting and spoke our minds.

My point so far is that if anyone would come up to give ANY REASON why this #EndSARS protest was retained on the street by blocking major roads BEYOND that same 15th of October, such a fellow should do it now.
We pleaded, nobody wanted to listen.

So don’t go to war without wise guidance;
victory depends on having many advisers. Prov 24:6 (NLT)

When #EndSARSProtest started, some of us insisted that our focus should be on #PoliceReformNG.#EndSARS ended but reality of brutality is here pic.twitter.com/yX3ygziE0o

AT the time it was becoming obvious that sustaining this #EndSARS protest on the street would bring danger because different groups with ulterior motives were already “operating” we warned that it’s time to dialogue. Your CELEBRITIES & INFLUENZAS said NO.

“In the heat of victory, arrogance and overconfidence can push you past the goal you had aimed for, and by going too far, you make more enemies than you defeat. …Set a goal, and when you reach it, stop.”–Robert Greene#EndSARS pic.twitter.com/RzyYY8nkLj

Then came the day, 20th Oct 2020. Events became horrible such that Lagos Governor @jidesanwoolu had to declare curfew around 11:49AM.
It was constitutional to declare a curfew.
So, your penchant for lawlessness will not change that reality looking at the event of violence then. 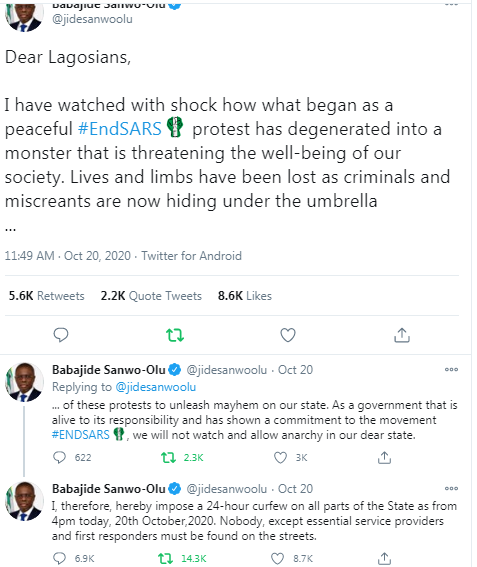 There was nothing illegal about the military being at Lekki, let’s get that clear. The use of force was what is not acceptable on the protesters. Soldiers are called to situations where the Police is outclassed. It is legal to use soldier internally and this was not illegal. We said they should protect us, that’s our right and no one can say anything contrary to that.
You also said AFTER curfew was announced since 11:45AM it was the right of protesters to disobey the legitimate pronouncement of the State since it’s DEMOCRACY, we have every right to disobey the law and be protected by the law.
Did you say four hour was not enough to move from the protest ground?

2. Nigerians across the globe believed it @ighalojude made a video on it.

3. This unfortunate narrative of #LekkiMassacre eventually led to practically handcuffing the Military who couldn’t do much in Lagos on the 21st of October that Lagos was brought to her knees with multiple attacks of terrorism. Police couldn’t come out, they became an endangered species, Soldiers must not engage if not it would be another breaking news of massacre. A particular handle tweeted and said 78 people confirmed dead from the #LekkiMassacre
Later, @dj_switchacolic said that’s not her original handle.
Newspapers & TV stations reported figures, later reduced it to 7 or 15 depending on where they woke up from.
Was there a MASSACRE at Lekki?

Are you the only one with smart phone? Others used 3310? If 15 corpses were laid at the feet of the Army, you couldn’t have carried them alone. Others at the rally would have their phones on, even if yours was off. Are you saying EVERYONE missed the opportunity to film the corpses or took their PIX in year 2020 gathering of youths?

AK47 bullets piercing through bodies at close range would lead to river of blood at Lekki toll gate if 15 people died o that night.
Such sea of blood should have clotted on the road & visible for people to see no matter what.
@channelstv was there in the morning, show us what you saw please. We know people were scampering for safety in such situation. How did a couple of people were able to carry 7 or 15 corpses to where the military men were shooting? Are you saying none of those that carried the corpses had any picture, video or other had no phone to snap afar off?

Forget the fact that the teargas was used against you and others was like Cotonou pepper mixed with acid according to you. How did you all run out & return back to the scene again & again.
Ok, 15 young guys allegedly shot, did any of them have a smart phone on them? Where’s it please? Too many questions from that video.
“Soldiers were running to pick the bullet shells” but teargassed protesters were also picking the shells along with Soldiers with guns in their hands who just shot 15 people without any fear of being shot also?
Why is this getting so complex?

Why are we treating this serious issue with emotion as though we are not happy that GENOCIDE or MASSACRE didn’t happen that night?
What exactly is your gain to insist that massacre happened & still keep to that line while finding it hard to show us evidence?
#LekkiMassaccre?

Massacre is defined as “the unnecessary, indiscriminate killing of a large number of human beings or animals, as in barbarous warfare or persecution or for revenge or plunder. general slaughter, as of persons or animals:the massacre of millions during the war.“

He who alleges must prove abi?
Go ahead and show the pictures or names or family members(like that of Ogbomosho)…Go ahead please, we need to know those who died at Lekki that night.
A blackmail that had led to terrible attack on Lagos & destruction of lives & properties is what you guys are treating with emotion?
#LekkiMassacre2020? Why is it becoming more difficult DAILY to prove this?

How could DJ that did live video on the night of the event fail to have one picture at least of the 7 bodies she said she counted before her phone went off? How could sea of heads of GenZ that loves to take picture miss this? Was there a massacre at Lekki toll gate?
The Lagos Govt must show every available evidence & footages around that vicinity. We need to know what happened that night.
If #LekkiMassaccre was a propaganda, then all the celebrities & TV stations involved must pay for this!