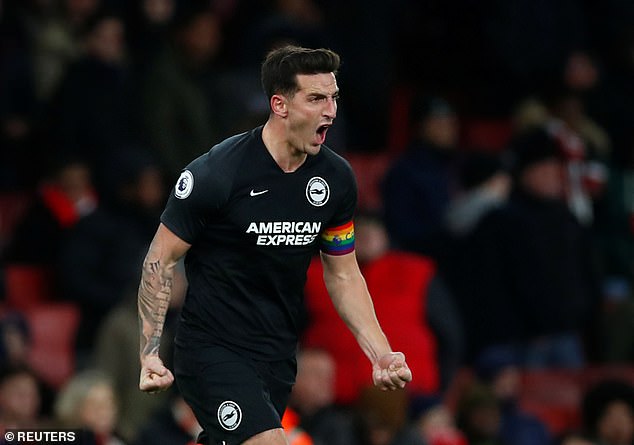 The Seagulls came away from north London with a 2-1 win that pulled them away from the relegation zone and left the Emirates Stadium ringing with boos
Brighton travelled to the Emirates Stadium on Thursday knowing they could turn the Arsenal crowd against their side, according to Lewis Dunk – who was surprised by how little challenge the Gunners presented in their 2-1 win.

While Graham Potter’s Seagulls had won plaudits for their recent performance against Premier League leaders Liverpool, they had been flirting with the relegation zone before the game.

Goals from Adam Webster and Neal Maupay, either side of Alexandre Lacazette’s equaliser, saw Brighton leave with three points few could argue they hadn’t deserved.

“I think if we put them under pressure, and got into them early like we did, I think it was going to be tough for them,” defender Dunk told football.london.

“They are going through a tough time, and if we got on top of them, the crowd would go against them and we managed that.

“I think it was probably partly our fault that we didn’t kill the game off in the first half. We got into some really good positions, we missed a couple of great chances and if we had come in at half-time leading by more of a gap, I don’t think they even come back into it.

“We gave them a little chance, but we came back at the end.”

While Arsenal did mount something of a revival following Lacazette’s header early in the second half, there were few clear-cut chances created by the home side and they were flattened by Maupay’s late winner.

There were boos at half-time and full-time, with Freddie Ljungberg experiencing something of the opposite to a honeymoon period in his first games in charge.

“We were probably expecting more but it was credit to us the way we can play football,” Dunk added.

“In the end we won dirty if you look at it in the second half. They reacted well after us being on top for the whole of the first half and they showed a good reaction, changed the game and brought on [Nicolas] Pepe.

“He changed it a little bit for them in their favour and we couldn’t get a foothold but, in the end, we showed great character after to come on and win the game.

“We have changed a lot and we are showing what we can do, we have got to take credit for the way we performed there and take the positives from it.”