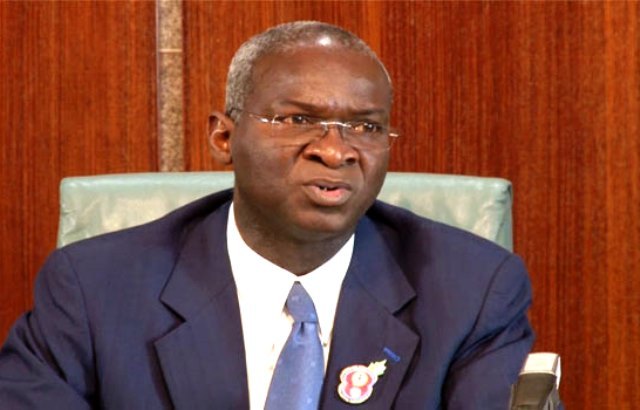 This past week, The Minister of Works and Housing, Babatunde Fashola, has been criticized by many Nigerians for his statement on the state of Federal Roads across the Country.

While addressing state house correspondents on Wednesday, Mr Fashola shared his views on the country’s road networks and the plan of his ministry.

But part of his statement that some of the roads were “not as bad as sometimes portrayed” irked many Nigerians, and they didn’t take time to check the context and what he actually said, hence could not hold back their discontent on social media.

While the main opposition party took the opportunity to make use of fake pictures of roads from Liberia to tackle Fashola, others also used the opportunity to post some good roads they have come across which was the core of what Mr Fashola said in his broadcast.

From his twitter handle, @dmightyangel posed a question on the said statement of Fashola by posting the available video from Channels TV for all to listen to and judge within the context of the conversation.

Hey, wetin una talk say Fashola talk again, abi no be the video be this?

Below is the full transcript of the minister’s speech on Wednesday about the roads:

“I understand the role of the media, not just to report the news but also to educate the public.

“I have invited this (press) corps to either convey a one-day meeting where all the issues concerning roads and housing (can be) addressed and I make myself open to any invitation as you may deem fit so that you can have a better understanding of what’s going on in various sectors.

“I say this in the context of: when I come here to announce that a particular amount has been approved for a contract, that doesn’t mean the amount has been paid, contrary to what you suggest.

“You’re mindful also that the ministry of finance, different arms of government are escalating the fiscal challenges we face as a nation, in trying to fund the budget. You’re also mindful that the last few budgets in Nigeria in the last 20 years have been deficit budgets. These are terminologies and realities we should acquaint ourselves with if we are going to not just report but also educate the public.

“You must also be aware that between awarding a contract and mobilising, there is a distance. First, we have to have an agreement between the ministry of works and the ministry of justice. There is also a role that banks play. These are the things I’d like to know as a correspondent, in order to be able to help me better inform the public.

“Also, building materials, rocks, laterite, quarry, iron rod have to be ordered. Construction companies don’t keep them. The process of blasting rocks requires approval from the ministry of mines and even the office of the NSA (National Security Adviser) to get approval, to get dynamite.

“(On) the problem of some places like Warri/Benin/Sapele road, and the southeast you talked about. First, you have to know that these places don’t stand in isolation. The Niger Delta is the lungs of Nigeria; that’s the rainforest, a high water table area.

“These problems (were) not as pronounced as they are now in January and February. The reason is that is the dry season of the year. This is the rainy season. I know no country that doesn’t face transport challenges in extreme weather. In some places, it is winter and snow; they cancel flights. In some places, it is typhoon.

“Flood will affect roads. We’ve seen cites submerged. We’ve seen infrastructure blown down in other parts of the world. It’s one world. This is our time to experience it. We want this season to quickly end so that we can go back to work in the dry season.

“That takes me to the preparation for the ember months. We would be working with the law enforcement agencies, the FRSC, our contractors. The plan is that, in places where they are not yet constructed, they should make palliative so that the heavy traffic movement during the end of the year is manageable and we reduce the inconvenience of our commuters to the barest minimum.

“Help us manage the understanding of the public that you can’t drive through a construction site at normal speed. You owe us that understanding that people must expect some inconvenience. We regret it but we would do our best to bring it down to the barest minimum. If we don’t have rainfall in a year, it will affect food. These are the realities of existence.

“Let me also say that today, my colleague in transportation, Rotimi Ameachi, announced some initiatives. I won’t steal his thunder than to say we expect benefits from those initiatives on some critical routes during the next few weeks that will bring relief to our road networks as those train services come on stream. I’m confident that all of these problems will become history within a short time.

“To appeal to you, yes, we are here to solve problems. Problems (are) headlines for you. But I think, for balance, it is also to show that not all of the roads are bad. Because the focus is on the bad part but you owe Nigerians, whose taxes we use, to also show them that some works (are) going on. Because it is not all Nigerian roads that are unmotorable.

“It is important for us to have balance in order to encourage people to have hope in the country because it is not as bad as sometimes we portray it. That’s your headline, we know. But it’s important we let them know that on a 100km stretch, maybe 10-15 per cent is bad. Maybe you actually drive to that point before you feel the pain. Those are the places we would address. Thank you very much.

A few Nigerians have posted on their twitter handle to show that not all road is bad as explained by Fashola. @ricc13 posted the picture of Ilorin-Jebba Road

I was on Ilorin-Jebba-Mokwa road this last Wednesday & this is what I saw & trveld on @tundefashola said not all Nigerian roads are bad & d @henryshield s of this world are calling for his head, misquoting him upandan. When u report d bad ones, be sure to report d good ones too. pic.twitter.com/NvZi87HOew

In response, a few others also posted some roads that are good while not denying the reality of the bad aspect of Nigeria roads.

Got this from someone's tl few days ago,can remember who i could have tagged him but the video speaks for itself.Naija go better✌ pic.twitter.com/Vf6NhE8UQi