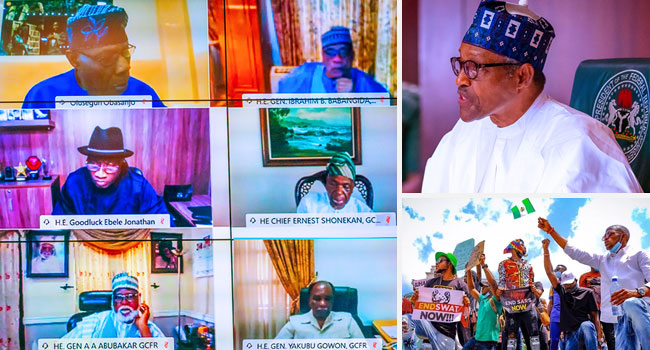 Immediate past President, Goodluck Jonathan, has said the root cause of the recent protests in the country had been with Nigeria for a long time.

In a post on his website on Friday captioned “Inside PMB’s Parley With Former Heads of State,” Adesina who is the Special Adviser, Media and Publicity to the President, noted that the former Nigerian leader said some fundamental questions needed to be answered.

The former Bayelsa State Governor said posers like “what led to the crisis?” would help the country in forestalling future occurrences.

In what he described as “very touching,” he equally quoted most of the former leaders as saying that the #EndSARS protest which began peacefully,  was later hijacked.

“Lives had been lost in scores, countless public and private properties burnt, there was murder and mayhem everywhere,” Adesina explained.

“So, it was needful that all former leaders of the country meet to put heads together, and fashion pragmatic ways forward.”

After the National Anthem, he said that former Head of State General Yakubu Gowon who gave the opening speech agreed that the #EndSARS protests which began peacefully, was later hijacked by some “organized miscreants.”

Gowon equally gave some recipes for the government to consider.

Buhari who spoke next issued comprehensive details of how the protests began, and efforts made by the government to address the demands of the demonstrators.

The Nigerian leader “did not mince words that what started as [a] legitimate protest by youths, was hijacked and misdirected by enemies of the country.”

Despite a history of antagonism to the President Buhari government, ex-President Olusegun Obasanjo “was frank, but affable, and no tension was discerned” and “lauded the Nigerian leader for his speech the previous night.”

“On the job and economic situation in the country, he said the interventions being made were good, but not far-reaching enough for a population of 200 million people,” the presidential aide said, referencing Obasanjo.

General Ibrahim Badamasi Babangida (IBB) expressed sadness at the turn of events in Africa’s most populous nation, extending his condolences to those who lost loved ones and properties.

Although he was worried by the quality of intelligence available to Nigerian security agencies, IBB commended “the government for the efforts so far, to end the protests.”

Chief Ernest Shonekan was brief in his speech and called for proactiveness to curb similar developments in the future, stressing that such meetings should hold often to proffer solutions to national issues.

General Abdulsalami Abubakar also harped on the need for better intelligence on the part of security agencies and believes there is a need for more collaboration with the international body.

“Funding of security agencies should also be looked into, while the media should be adequately engaged,” the former head of state added.

Turning Out For Motherland

“All that weight of experience was available at the meeting on that day, for the country to draw from, in restoring peace and cohesion after about two angry weeks,” Adesina added.

At the onset of the month, many Nigerians took to the streets, demanding the scrapping of the Special Anti-Robbery Squad (SARS), a unit of the Nigeria Police Force (NPF) hated by many in Africa’s most populous nation.

The now-defunct unit of the police was accused of human rights abuses and extra-judicial killings, a development which the demonstrators say had been going on for years.

Despite the scrapping of the unit by the Inspector-General of Police (IGP), Adamu Mohammed, the protesters stayed on the streets, citing similar pronouncements (scrapping of SARS) which were made in the past but came to nothing.

Things took a dangerous dimension on Tuesday last week when armed soldiers opened fire on the protesters in the Lekki area of Lagos State.

The shooting, witnesses say, resulted in the death of scores of persons but the Nigerian Army later denied responsibility for the incident.

Human rights organization, Amnesty International, however, put the casualty figure from the incident and another one at Ikeja at 12.