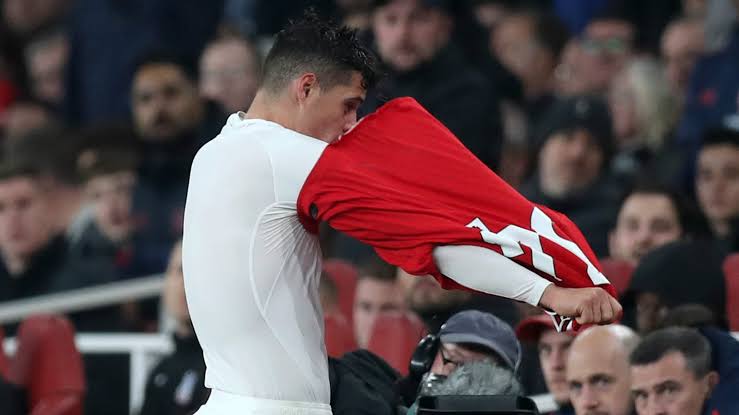 Unai Emery refused to confirm if Granit Xhaka will remain as Arsenal captain after admitting the Swiss star was wrong to become embroiled in an astonishing feud with Gunners fans during Sunday’s 2-2 draw against Crystal Palace.

Emery’s side blew a two-goal lead at the Emirates Stadium before Xhaka’s tantrum laid bare the simmering tensions at a club in danger of spiralling into crisis. Arsenal boss Unai Emery gives verdict on captain’s outburst at home supporters When Xhaka was replaced by Bukayo Saka in the second half, the midfielder trudged slowly to the touchline while petulantly gesticulating to the fans who had cheered his substitution and were angrily urging him to get off the pitch quicker. Xhaka’s meltdown climaxed when he ripped off his shirt, appeared to shout f**k off at supporters and stormed past Emery straight down the tunnel to more derision from the stands. Having watched his skipper behave in such a childish manner, Emery conceded Xhaka was out of line. “He was wrong. I want to be calm but, really, he was wrong in this action,” Emery said. “We are working with the players to play under pressure. In a difficult moment you can be hot. You have to be clever. “We play for the supporters.

We need to have a lot of respect for them when they are applauding us and when they are criticising us.” Xhaka, appointed captain in the close-season, was already disliked by sections of the Arsenal fan base after his largely disappointing form since his 2016 move from Borussia Moenchengladbach.

The 27-year-old faced calls to be stripped of the captaincy from Arsenal fans on social media. And Emery said he would speak to the player and the club before deciding whether Xhaka would retain the armband. “It is not the moment to talk about that. First I need to speak to him and speak to the club,” he said. “I think now is the time to stay calm and speak to him. We need to speak inside (the club).” — ‘Manage VAR in right way’ — After failing to qualify for the Champions League last season, Emery is under pressure to secure a top four place this term, but there are signs the fans are turning against him. Fifth-placed Arsenal were booed off at full-time, while supporters chanted Mesut Ozil’s name in a pointed reference to Emery’s refusal to pick the German star. Yet former Paris Saint Germain boss Emery insisted his team retain the support of the Arsenal crowd. “They are the reason for their work. I think the connection with the team was amazing in the last 20 minutes.

There were some special circumstances but in general they support us,” he said. Emery’s frustration was clear after another difficult afternoon following hot on the heels of Arsenal’s shock loss at Sheffield United on Monday.

The Spaniard was angry that VAR had denied Arsenal an 83rd minute winner when Sokratis fired home, only for the goal to be ruled out for Calum Chambers’ foul on Luka Milivojevic. VAR had also overturned referee Martin Atkinson’s decision to turn down Palace’s penalty appeal when Wilfried Zaha was booked for diving.

Luka Milivojevic slotted in the penalty and Jordan Ayew bagged the equaliser as Palace recovered from early goals by Arsenal defenders Sokratis and David Luiz. “You can speak about our performance but also the decisions of the referee and VAR,” Emery said. “We scored a good goal. VAR said it is not.

I checked after and it is a goal. It is not a foul. If the referee watches it on TV I’m sure he’s not going to decide it’s a foul. “I don’t know who decided it in the Premier League offices. For me VAR is positive and we need it but we need to manage it in the right way. “For us it is not working well. The team deserved to win.”