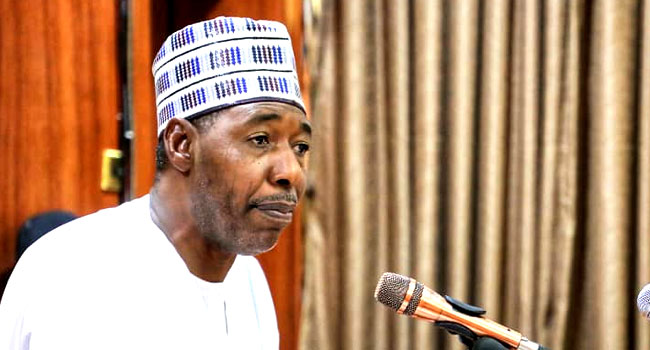 The convoy of Borno State Governor Babagana Zulum again came under attack earlier on Sunday on his way out of Baga.

Zulum had departed Baga at about 10:30 after a two-day visit to receive indigenes of the town back home after 21 months of exile.

Few kilometres away from Baga, unknown assailants believed to be Boko Haram opened fire on the escort of the governor.

The convoy was being escorted out of Baga by the military who replied the gunshots and cleared the way for the governor.

The attack happened barely 48 hours after Borno State Government officials were ambushed on the same route while travelling to Baga to join the governor who had flown in via an Air Force chopper.

Reporters on the ill-fated convoy say sixteen persons were confirmed dead while the whereabouts of an unspecified number of people can still not be accounted for.

Members of the National Union of Road Transport Workers (NURTW) working with the state government’s resettlement committee to clear shrubs from the road for clearer vision, also reportedly disappeared after the attack.

Zulum said in an interview in Baga before taking his leave, that he is saddened by the lives lost during the Friday attack, and pledged to support their bereaved families.

The governor has since arrived Maiduguri, the capital city after successfully performing the resettlement issue that took him to Baga.